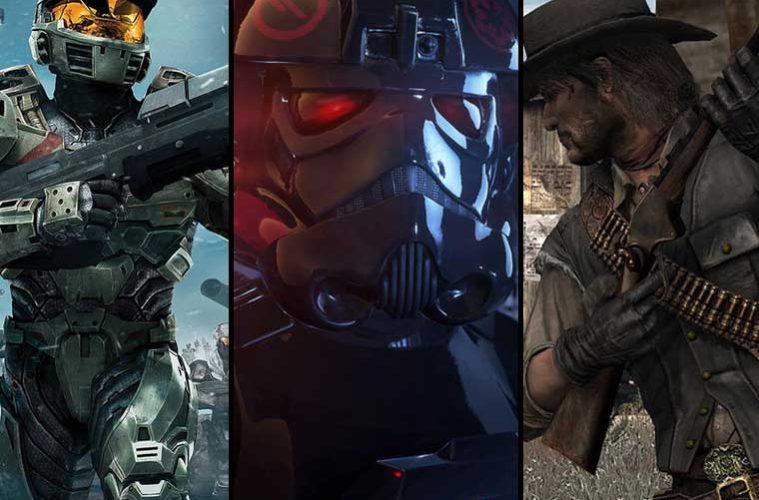 With an exciting time for online gaming ahead of us, let’s look back on the absolute highlights.

This gem of a game type made its debut in Halo: Reach, and was then never included in another Halo title since. Why this is the case remains a baffling decision to those who loved the fresh experience in 2010.

To sum up, a team of Spartans is tasked with defending their base from an opposing team of Elites, and as the Elites gain more and more territory, Spartans must fall back and make use of their various power weapons and vehicles to hold them off.

It was the closest Halo ever got to feeling like a Battlefield game, and we loved it. The large scale maps, new vehicles such as the falcon, and the option to spawn on team mates collectively allowed a level of teamwork never before present in the series, while managing to stay true to Halo’s roots. That makes it all the more tragic that depending on the time of the week, finding enough players within the Invasion playlist to successfully start a game can be pretty difficult at best, and near impossible at worst.

After all, it has been almost eight years since Bungie’s swan song to Halo was released. (Feeling old yet, millennials?)

Today, gamers are often faced with questions like this: do I buy the standard edition, the deluxe edition, the super deluxe edition, or the super deluxe definitive edition? The super deluxe edition may grant you access to all of the game’s future DLC, but the super deluxe definitive edition unlocks an exclusive character for only £10 more. What a world we live in. Additionally, micro transactions force you to pay for certain in game outfits, weapons and upgrades, after you’ve seemingly bought a full game. In the case of 2017’s Star Wars Battlefront 2, EA caused outrage by taking micro transactions further: you couldn’t even pay a few pounds for a certain weapon upgrade, but instead had to pay for a chance to get what you wanted. (You had a good chance of getting repeats)

That’s why we recommend hopping into a game of Star Wars Battlefront 2 – the 2005 version. Online play has been brought back for the classic Star Wars shooter on both Steam and GOG, and it’s as fun as we remember it ever being. In fact, once you get used to the older graphics, we find it a hell of a lot better than the new version.

This was a brilliant online cooperative mode, and the objective was dead simple: with a limited amount number of lives, you and up to 3 friends had to eliminate a set number of AI enemies. You could adjust the difficultly, the number of enemies and even the density of their spawns. There’s also the option to set a time limit for added tension, and a wide variety of maps for you and your friends to conquer. It’s extremely tense on the harder difficulties, so anyone looking for a challenge will be in for a blast. But if you’re still not convinced, this next feature is what really set the experience apart from the crowd…

Rainbow Six Vegas 2 contains one of the only instances of Microsoft’s ill fated Xbox Live Vision Camera being put to good use: you could use it to import your face into the game. And if you thought the Kinect’s face scanning ability looked bad in 2015, you should see what 2008 had to offer. Imagine printing out a 2D photo of your face, and then attempting to spread this over your actual face. That’s pretty much what the game did to your custom character, and it’s so laughably awful that we couldn’t get enough of it. We may love it for the wrong reasons, but online gaming has never provided a funnier experience since.

Rockstar’s second attempt at an old western themed, open world game offered a unique and immersive online experience. Just like GTA acts as an urban simulator, Red Dead acted as a western simulator – you could ride horses, go hunting, compete for territory in ‘land grab’, clear out gang hideouts, go on a maniacal killing spree to become the town’s most wanted criminal, or play the hero – hunting down criminals for their bounties – all while unlocking various weapons and mounts as you gained experience points. You could also invite players to enter poker games, more traditional team death matches, cooperative story missions, and even zombie survival maps (provided you’d bought the incredible ‘Undead Nightmare’ DLC).

We simply couldn’t list all of Red Dead’s features in one article. You could imagine the fans’ disappointment, therefore, when hackers infected the servers, making global online play next to impossible. If you were thinking of buying this classic, be warned that multiplayer will pretty much be limited to private online games with your friends.

What kind of a multiplayer highlights list would this be if we only includedone Halo game? Upon its release in 2007, the holy grail of the Halo franchise boasted a variety of great multiplayer maps and game modes. The ability to easily create and share custom maps and game types offered an online console experience like none other at the time, which led to the establishment of a dedicated community. From Zombie survival modes to sumo wrestling, from virtual sports such as ‘Grifball’ to intense 1v1 slayer – there really was something for everyone. Another feature ahead of its time was theatre mode, which allowed players to watch, save and edit replays of their games, and then share these clips with their friends. Today, this functionality comes built in to consoles, and is used by pretty much everyone.

Sadly, most of the player base has moved over to The Master Chief Collection, which disastrously only features a fraction of Halo 3’s game types within the multiplayer playlists, and somehow doesn’t include as intuitive of a file sharing system, or community features in general, even though Halo 3 nailed it seven years beforehand.

Have a look at a students guide to gaming.