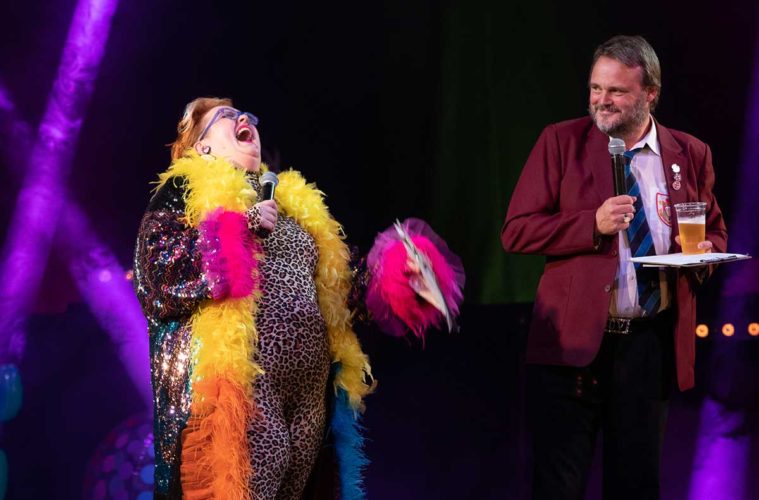 Jayde Adams, Ed Byrne, James Acaster, Desiree Burch and many more join the line up to help Save Live Comedy

Following on from a successful show this Sunday gone, featuring the likes of Al Murray, Dane Baptiste and Kerry Godliman, the Clapham Grand is excited to announce it is once again opening its doors once again to customers this Sunday 23rd August for the final Save Live Comedy show.

In accordance with the recent Government announcement allowing indoor events to take place, the Clapham Grand will be inviting customers to return and be part of the audience, albeit physically distanced, on a limited number of ground floor level tables. They have released a limited amount of tickets to watch the Save Live Comedy shows live.

For those that don’t get hold of tickets, they will also be broadcasting the comedy shows in a TV quality live stream. Viewers can watch free online (donations encouraged of course) on twitch, or buy a special Zoom Ticket for just £9.99 and join the show’s virtual audience that the comedians can see and interact with on show night! You can also help save live comedy by buying the show’s merch including funky limited-edition t-shirts, and posters signed by the cast.

Some of the brightest new stars and biggest names in comedy are set to take to the stage to help raise funds for the comedy community. This Sunday sees Jayde Adams joined on the bill by Ed Byrne, Desiree Burch, James Acaster, Kane Brown, Richard Herring, Tony Law, Felicity Ward and many more.

After running a successful government endorsed pilot for the first ever physically distanced indoor gig, with Frank Turner on the 28th July, the Clapham Grand is excited to have an audience return to once again to enjoy entertainment safely inside the venue, whilst broadcasting to thousands of people around the world. These shows will also likely work as a stepping stone for the Clapham Grand to reopen on a more consistent basis moving forward.

Clapham Grand manager Ally Wolf said of the shows “We are incredibly excited to be hosting some of the first physically distanced live comedy shows in the UK post lockdown, as well as streaming the shows live for all to enjoy. The shows are bursting with talent and there will be loads of surprises, helping support the Save Live Comedy movement and the British live comedy circuit. We want to thank all the comedians taking part for their support and a big thanks to the returning audience. It has been a long time coming, and we can’t wait.

“We are taking safety very seriously and have put in as many steps in as possible to make the night physically distanced, but also a sense of audience amongst the crowd. The Clapham Grand is following all Government guidelines with regards to Covid-19 safety. We are operating at a greatly reduced capacity, with the entire audience being physical distanced on seats and tables with waiting staff on hand for drinks service. We are providing a discounted pre-order drinks menu to purchase in advance alongside the ticket to minimise contact within the venue and to maximise speed of service!

“We will be carrying out staggered entry times for all guests, temperature checks on entry, track and trace and we will have anti-bac available at all key points of the venue, with all staff wearing appropriate PPE”.