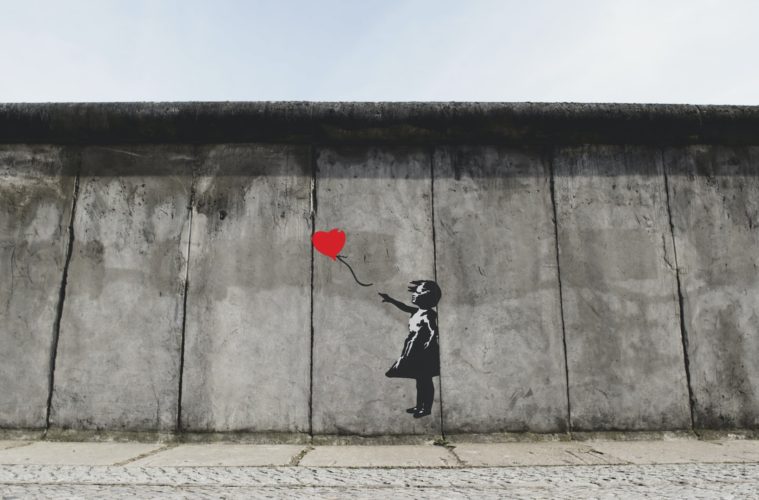 Like the secrets of Stonehenge and anyone who buys a kebab at 2am, Banksy’s true identity has baffled the world’s greatest minds. UNTIL NOW…. Because the SPG can revel the SECRET IDENTITY of the elusive street artist, once and for all. Who is Banksy? One of the people on this list below, that’s who!

Professional swearer and sometime chef Gordon Ramsay doesn’t immediately jump to mind when you think of Banksy. However, his failed Glasgow restaurant Amaryllis has an uncanny resemblance to the 2015 Weston-Super-Mare art project Dismaland. Uncanny indeed…

It might seem odd for a committed environmentalist to be using so many aerosol spray cans as Banksy does. Until you join the dots and see that his Regent’s cannel piece “I DON’T BELIVE IN GLOBAL WARMING” that drowns itself with the tide could have been drawn by none other than the Swedish School-Skipper herself.

When not busy appearing on literally any TV program that will have them Ant (and possibly Dec) may very well be causing havoc by spraying their cutting-edge counter-culture message on every vertical surface they can find. In Wall and Piece (2005) Banksy mentions his use of rats in his artwork, rat being an anagram for art. Ant, being only one letter away from art, is a prime suspect. And where Ant is, Dec won’t be far behind. (Unless Ant is drink driving again in which case all bets are off).

With the world’s poshest voice and a penchant for high brow quiz shoes, Stephen Fry has the perfect double life for his tagging adventures. Who would suspect the cuddly and harmless national treasure of being Banksy? We would, that’s who. Fry famously admitted doing cocaine in, among other places: Buckingham Palace, the Houses of Commons and basically anywhere with a flat, shiny surface. He clearly couldn’t resist incorporating this into the piece Snorting Copping (2005).

As a sterling example of fair play and good sportsmanship, Southgate is a great example to the nation. Except when it seems he can’t resist stencilling every wall in town on a one-man crusade against the establishment! After years of attending football matches, he was probably sick of seeing so many flags, prompting him to produce People Who Enjoy Waving Flags Don’t Deserve to Have One (2003) and speaking of flags…

When he’s not ruining the country, BJ likes to ruin perfectly good walls, spraying his thoughts like an unneutered tom cat. His Breix Mural (2017) clearly shows Johnson’s rage at the absolute shambles caused by…. umm, himself?

As a lifelong Londoner, Sir Alan has the local street smarts to evade capture by the Met Police and elude the press at every turn! However, his trademark cutting jibes were his undoing. As we see in one of Banksy’s earlier works Laugh Now, where a depressed chimpanzee wears a sandwich board saying “Laugh now, but one day we’ll be in charge”, invoking the tense atmosphere of the boardroom. An atmosphere Sir Alan was apparently unable to resist brining into his street art.

(Also, most of the contestants on The Apprentice could be replaced by chimps and no-one would notice, so there’s that as well).

Rapper (and WAPer) Cardi B is no stranger to controversy, causing professional right-wing drama queen Ben Shapiro to start crying over the though of her well-lubricated privates.

Well, what does the “B” in Cardi B stand for you ask? Banksy.

As can be seen by her latest geometric body suit, she is clearly a woman who knows her way around a stencil.

Surprisingly spry at 84 years young, Pope Francis often speaks out about social issues. And when not meeting with world leaders, or having afternoon tea with God, he can be found on the streets of Camden town, painting his sermon of anticapitalistic ire onto the wall. But he still couldn’t resist a cheeky self portrait of himself on a Vespa scooter near the Vatican no less!

But Pope Francis is NOT Banksy. And for that matter, neither are any of the other people on this list.

1) The Real Banksy was inside us all along.

Ok, fine! You’ve got us. We have no flipping idea who Banksy is. But being honest, we don’t want to know. It’s nice having him be unknown. A name and a symbol against the boring hum-drum and the drudgery of capitalism.

Banksy is a hero, and we shouldn’t try to unmask him. Let’s just enjoy his art and celebrate what it adds to the world.

Mind you, that’s exactly what Banksy would say, isn’t it? Anyway, I’ve said far too much…