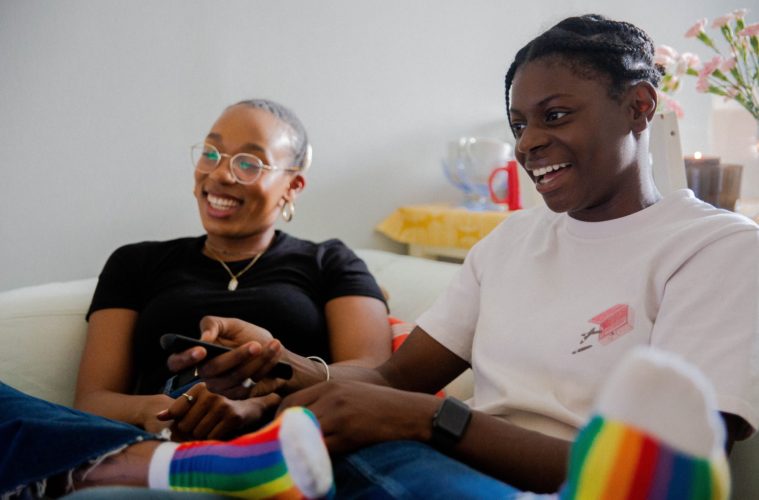 With Pride Month in full swing it seems like the perfect time to learn about LGBTQ+ history and bring attention to and celebrate the LGBTQ+ content available for you to enjoy on Netflix UK.  There were too many for me to list them all, which shows we’re definitely stepping in the right direction when it comes to LGBTQ+ content.  So, I’ve chosen some of my favourites that I recommend to everyone.  Here’s my list of 8 films and series heavily featuring LGBTQ+ content waiting for you on Netflix UK right now.

Queer Eye For the Straight Guy has been rebooted on Netflix UK after ten years simply as Queer Eye. It doesn’t matter if you’re gay, straight, bi, trans, or something else the Fab Five are here to make you feel confident in yourself and love yourself for who you are.  The new Fab Five consists of Jonathon Van Ness on grooming, Antoni Porowski on food and wine, Tan France on fashion, Karamo Brown on culture and lifestyle, and Bobby Berk on design.  Together they cover every aspect of the people they’re making over’s lives.  Plus, they call the people they’re making over Heroes, showing them how much they do for their communities, and families, showing how much they are appreciated.

Queer Eye is an all-inclusive show that welcomes anyone and makes them feel good about themselves.  Its so wholesome that as a viewer you can’t help but feel good too.  They manage to do all this while also bringing attention to serious topics like racism and religion without bringing down the mood.  Queer Eye have even taken their expertise to Japan with their series Queer Eye in Japan, so check that out too.

Call Me By Your Name

This Oscar-winning romantic drama is a must-see piece of LGBTQ+ content available on Netflix UK right now.  Set in Italy in 1983, the film stars Timothée Chalamet in his break-out role. Chalamet plays Elio, a 17-year-old who starts a relationship with his father’s assistant, Oliver (Armie Hammer).  This leads to Elio exploring and understanding his sexuality more deeply and having to deal with everything that comes with being in love, good and bad.

Call Me By Your Name is award-winning for a reason, the performances by Chalamet and Hammer are excellent, as well as those from the secondary cast.  The Luca Guadagnino’s direction combined with James Ivory’s screenplay makes for an incredibly sensitive and nuanced piece of film that explores all the bittersweet emotions that come with being in love for the first time.

Heartstopper is a series based on the graphic novel series of the same name by author, artist, and screenwriter Alice Oseman.  The series follows Charlie Spring (Joe Locke) an openly gay year ten prone to overthinking things and Nick Nelson (Kit Connor) an extroverted rugby-playing year eleven.  The two become friends quickly after being put in the same form, and Charlie starts to develop a crush on Nick.  However, he knows it’s hopeless because Nick’s totally straight, right?

Heartstopper is a very cute story that expands on the graphic novel really well and accurately portrays kids who are in their early teens just starting to have romantic feelings for one another and discovering who they are.  It not only discusses homosexuality, but also bisexuality and being transgender (there is also a character who I suspect may be aroace, but I don’t want to speculate too much until I’ve read the whole series and season 2 has come out).  The series is written in a way that is easily understood by kids who are just coming into their teens and is a great piece of LGBTQ+ content for them to watch if they want to know more or think they may fit in the queer community.

Brokeback Mountain is a great piece of LGBTQ+ content and I’m so happy it is on Netflix UK.  Based on a short story by Annie Proulx, the film adaptation largely stayed true to her story and kept many of the iconic lines that make both Proulx’s work and the film so good.  Brokeback Mountain tells the love story of Ennis Del Mar, played by the wonderful late Heath Ledger, and Jack Twist, played by the marvellous Jake Gyllenhaal.  The two meet when they land jobs as shepherds and what starts out as a seemingly no-strings-attached sexual relationship becomes something much deeper.  However, a spanner is put in the works when the job ends and the two return to society and get married and have families of their own.

Brokeback Mountain is both beautiful and tragic showcasing the struggles of trying to maintain a non-heterosexual relationship at a time and in a culture where homosexuality was still not accepted.  Proulx’s writing is so simple yet so perfect and I am so glad the screenwriters stayed faithful to her original story.  This film is one of−if not my favourite−romance films to date.

The Danish Girl is inspired by the life of Danish painter Lili Ilse Elvenes, one of the first people to have sex reassignment surgery.  Based on the novel of the same name by David Ebershoff, The Danish Girl tells a fictional version of Elvenes’s life.   Known as Lili Elbe in the book, the film follows her struggles with herself and those around her as she comes to terms with who she is.  It all starts when artist Gerda Wegner asks Elbe (who is still presenting as male) to pose as a female model for her painting.

The Danish Girl tells a bittersweet story of the complex struggles surrounding gender identity.  While it is only loosely based on Elvenes’s life it brings deserved recognition to her and the sacrifices she made that must have helped advance sex reassignment surgery and understanding of gender identity.  It is a beautiful story to watch.

If you have to watch reality tv let it be Ru Paul’s Drag Race.  LGBTQ+ content can’t get better than this.  Ru Paul’s Drag Race is a reality tv show in which drag queens compete in a variety of challenges in order to make it to the final and become America’s next drag superstar.  These are not just any challenges either, the queens must showcase their acting, singing, dancing, sewing, and makeup skills and so much more.  It’s a cutthroat competition that can see a queen go home at any time, you’ll be on the edge of your seats hoping that your favourite queens survive another week.

Ru Paul’s Drag Race is responsible for bringing drag into mainstream media and making sure people appreciate it for the high fashion art form that it is.  Not only that but the show often delves into the issues that the queens face every day, whether it’s to do with homophobia, racism, struggles with mental health, or anything else the queens approach these topics with a no-nonsense and frank attitude using their own experiences and struggles to lift others up.  And now Netflix UK features Ru Paul’s Drag Race All Stars and Drag Race UK so there’s even more drag for you to enjoy.

Based on true events, Pride highlights the work of a gay and lesbian activist group in the 1980s who start raising money for the coal miners who have gone on strike to protest the closing of the mines.  The film follows a gay activist group led by Mark Ashton (Ben Schnetzer) who realises that the gay community are no longer facing the same level of harassment because the police, media, and everyone else’s attention has turned towards the miners.  Concluding that they have a common enemy Mark decides to start raising money for the families of the miners on strike founding the group known as ‘Lesbians and Gays Support the Miners.’  But because of their sexual orientation of the members of LGSM the miners don’t necessarily want their help.

Pride is an uplifting film that shows how hate and ignorance can be overcome if you just give people a chance and how kindness will be reciprocated with kindness.  It is a film about resilience and standing up for what you believe in and finding a support network who will be there for you when you need them.

It’s A Sin is a British drama miniseries that follows three gay young men who all leave their family homes for new lives in London.  The series takes place in the 1980s during the HIV/AIDS crisis where being gay was completely taboo and greatly frowned upon.  Over the course of five episodes a whole decade passes with the characters coming to understand themselves while also having to deal with the ignorance and homophobia rampaging around them.

The series, written and created by Russel T Davies, nearly didn’t see the light of day as various broadcasters were unwilling to air it because of the controversial subject matter.  Luckily, Channel 4 picked it up as a miniseries.  It received critical acclaim and prompted an increase in HIV testing.  Now it is available on Netflix UK and is one of the most watched LGBTQ+ content on the platform.