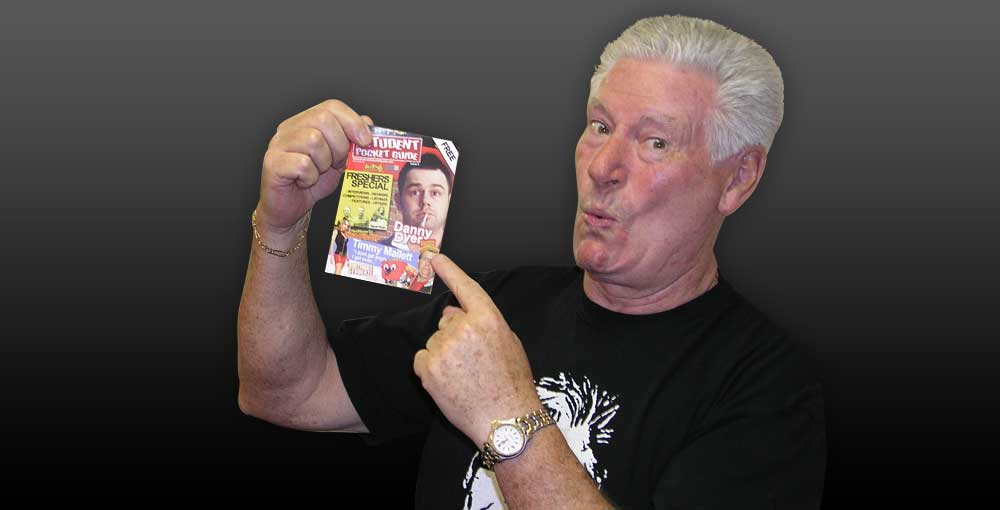 He is most famous for being the original presenter on the game show, Catchphrase, from 1986 – 1999, where he was known for his catchphrases: “It’s good, but it’s not right”, “Say what you see” and “Riiiight”. Roy Walker, aka the Legend talks exclusively to SPG.

How did you become the host of Catchphrase?
I became the host of Catchphrase in 1985 which is a lifetime ago. I think Bob Monkhouse was going to do it, it was offered to him, they also had Nick Owen and another guy. I was in Bournemouth doing the Bournemouth International Centre with Russ Abbot and they saw me there and they asked me would I do a pilot. I went down and did the pilot and nicked it off them!

Has an episode of Catchphrase ever gone wrong?
Loads of them have gone wrong. There was one time we were buying catchphrases from America and we were waiting in the studio for them to arrive by Gatwick to get them to Maidstone, to the studio. The wrong ones arrived, nobody could understand them, they were all American phrases. We had to take extra days to make the programme.

Why did Catchphrase end, and will it ever return?
For me it ended 6 years ago and I had done it for 14 years. With respect to the guy who took over from me, I think it had really come to an end where it needed to rest. They thought that it needed replenishing, a new presenter and a new setting but what they didn’t realise was that the attraction of Catchphrase was the original way it was done. You know Mr. Chips and all the naffness that goes with it.

If you could’ve presented any other show what would it have been?
Who Wants To Be A Millionaire. It’s lacking humour, it has no humour what so ever in it. I think it’s too serious, and they are giving away a million pounds and know ones watching, because they only give it away once a year.

You served 7 years in the army, how did that change you as a person?
It was different in those days. I was a wild teenager into Rock and Roll and stuff like that. It sort of quietened me down and got me a bit sensible and I found a lovely wife whilst I was in the army. I settled down and had 3 kids, came out and went straight back into show business. I really enjoyed it and made great friends which have stayed friends to this day.

Was Mr Chips being rude?
Yes, in the Snake Charmer Mr Chips was very rude. But it’s only your mind!

What do you make of the youth of today?
We’re going round doing 21 Universities and we can’t wait to get to them. It’s the most exciting thing that we have ever done! To go along to the uni’s, meet the students and to think that I had some influence in their lives is so flattering it’s ridiculous.

What are your top 3 desert island CD’s?
Queen, Elvis and Billy Joel.

Have you ever stolen a traffic cone?
No

You were once the Northern Ireland champion at throwing the hammer for two years, they still need you…Why did you stop?
(Laughs) Well if you ever want to become famous at an Athletics event, pick one that everyone else doesn’t do!

So Roy what else have you been up to lately?
This is my busiest year in the last 6 years. Stand up is my living but then a new diversion came through for the students with the Car Park Catchphrase, with Chris Moyle’s, which is coming back in Jan – he needs me! I’m doing some television next week, I’m doing a small part for Ant and Dec, and I’m in the final of the All-stars talent competition a week on Friday. So life’s really really good to me, I’m a very very happy person.

You have been voted by the Sunday Mail as having the best hair on television, what’s the secret?
Your dad. If he’s got good ones so have you. So long as your mother isn’t bald.

Marmite…Love it or hate it?
F**king hate it!