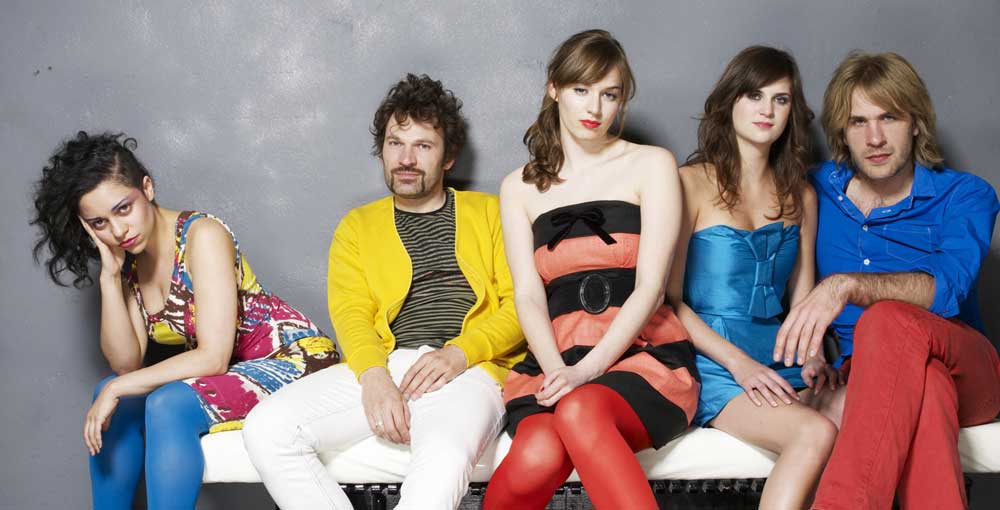 SPG: So how did you guys all meet?

Andy: I met Tahita (Bulmer) the singer and we kind of formed the band really. It wasn’t like we were going to get together to form a band, we just basically started writing together because we enjoy music. So we were making stuff in the studio and we came up with a few tracks and it sounded really good; we realised we had a bit of sound so we decided we wanted to do it live. We started asking around and met Igor (Volk) who was a friend-of-a-friend in a band called Spectrum; Lou (Hayter) worked at our label already and Sarah (Jones) was a friend of Barry Seven from another band called Add N to (X).

Did you go to university or college and study music?

Andy: No I didn’t, I don’t think that anyone did, did they?

Igor: I have a music degree

Andy: Wow, you have a music degree? Fucking hell I never knew that!

Igor: I played Jazz as a guitarist, never been any good though.

Andy: You are in this band!

So for those people who might not have heard of you, how you would like to describe yourself, and how would you introduce yourselves as a band?

Andy: We always like to describe ourselves as a kind of avant-pop band, or something a little easier to get your head around, a kind of pop/future pop band with new wave, disco and punk influences. It’s essentially pop but not cheesy and not obvious; it’s fun and kind of colourful.

Are there any bands in particular that have influenced you?

Andy: Prince, The Clash, Talking Heads; it’s a bit of a mixture really.

OK. Why the name The New Young Pony Club?

Andy: Essentially Tahita wanted a pony when she was growing up and never got one so when it came to think of a name it was like ‘let’s be a Pony Club, lets have our own Pony Club’ even though we’ve got no ponies. We were going to call ourselves Pony Club but we found out there was another band called Pony Club so we had to change it.

Has your album lived up to your own expectations, you know with the nomination?

Andy: Yes and no in different ways. I am really happy with the reviews we got, people really seemed to get it a lot of the time; some of them just didn’t but that’s fair enough. I was amazed at the Mercury thing, it was incredible! We did secretly know it was going to be a chart success though; it sold really well compared to a lot of other stuff. We were out selling bands like Gallows which are pretty big, we were up there but at the same time you know it’s not like a big number one, so you have to aspire to that really. We haven’t quite achieved that, we still have time, we just need a big hit on the radio and we will be fine.

Is it true that you had a lot of tracks ready before you signed with the label, but you decided to make an album with new material?

Andy: No, that keeps coming up but that’s basically bollocks. We had loads of material when we signed the deal, I would say half of the album, if not more, was written and almost recorded before we signed the deal. Then we did write a whole new load of stuff, and a lot of it we still have got. It’s not finished, we have loads of unfinished great material with great hooks which is not completely arranged, just kind of things that have been put on the back burner. Then we thought ‘We have to finish this album’ so we just looked at the tracks and the early ones were good.

Who is the craziest member?

Andy: Igor, he nearly blew up Lilly Allen’s bus with fireworks. I was thinking about that the other day, I had completely forgotten about that.

Igor: I was quite drunk really, one of them got under the bus and exploded there, there was a moment of chill and everyone stopped talking and I was like…”Ah…”. The bus driver came out screaming “What the fuck are you doing?” We literally wet ourselves it was so funny! I’ve also bitten Sarah a couple of times quite hard.

Sarah: He did actually and then brought me champagne to say sorry.

What has been your highlight of the year?

Andy: Mercury’s I think, not necessarily the performing but just being nominated is really special; the performance was great, that whole day was a special day really. The red carpet and everything- it was pretty cool.

Igor: We were really happy about our performance because sometimes when you feel under a lot of pressure things can go either way, and for us it actually went the good way; you know the pressure really did us good, we played a good show.

Andy: I wasn’t even that drunk but I was firing on adrenaline! It was great, we were really good.

Sarah: Every band that I spoke to said that they were really nervous. We don’t usually get nervous but there was just something about the night and everyone just wanted to do well. Playing in front of other bands all sitting round watching you was weird. You don’t usually get to do that unless you are on tour with them.

Have you got any special relationships with other bands?

Andy: I really like CSS (Cansei de Ser Sexy). Every time we see them I have a really long chat with them, usually Louisa. A lot of bands are really nice, they’re friendly and you get to know them but you don’t really feel like you have made a very deep connection, you know, you just have a few beers and whatever. We are also really good friend of LCD Soundsystem, we’ve known Klaxons (with whom we have done many a gig) for quite a while now, so I guess there is a special relationship going on there.

What are your future plans and ultimate goals?

Andy: To do the O2 Festival and build a pony shaped stage, like Prince did with the Symbol stage.

Igor: We are going to Sydney for New Years Eve, and I heard we are doing the Opera House. We are hoping we are going to have a good US tour coming up in October, we have played there before but just a handful of gigs, so this is our first proper one. I hope it is going to go down well.

How do the responses from fans in different countries compare?

Andy: The Australians are really up for it, but I find them not as intense as a crowd in England.

Sarah: [Claps] Scandinavians clap, clap, clap loads after but not during the songs and they don’t always dance but they really enjoy themselves without showing it.

Igor: New York was really hard, it was like a cool party, with cool people, with a cool band and everything was cool.

If you could learn a new skill in 24 hours what would it be?

Igor: I would like to be able to drum. That would be great.

Sarah: I would like to be able to do all those amazing jumps whilst ice skating.