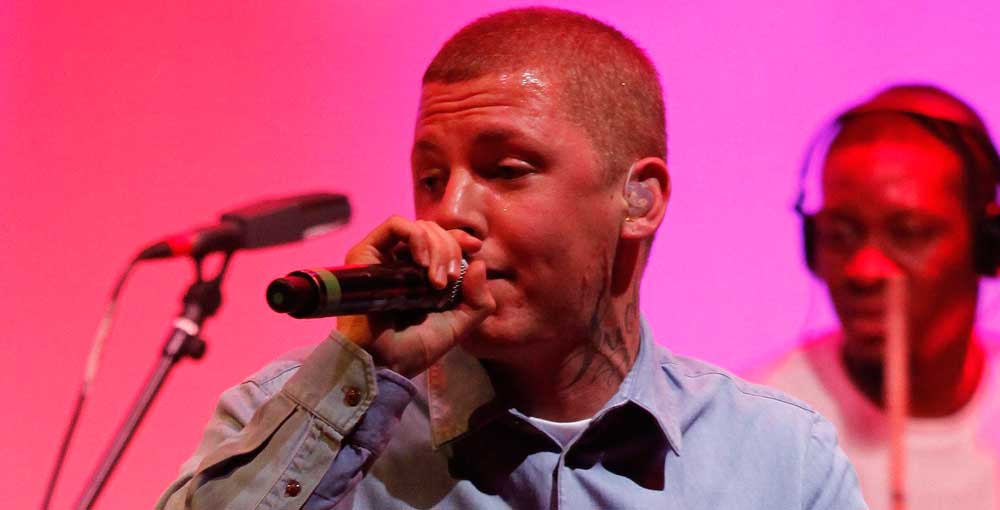 Mike Skinner [The Streets] signed you up to his label after your victory at the MC battles. How did things progress from there?
It was cool but the whole Mike Skinner situation was a bit of a false start unfortunately. It was a wicked experience but we never released a record properly which was a shame. It was kind of a learning curve for me. I was writing the first songs I had ever written and it took me some time to find myself creatively. At the same time, I knew which direction I wanted to go and Mike found it very hard to let go of the control. It took us a while to find some middle ground. Eventually we were both really happy with the music but the label got the financing withdrawn from Warner, so that was the end of that. I then became the property of Warner so it took me a year to get out of that contract. They weren’t pushing the music and I wasn’t able to release anything.

Would it be fair to say that there was an element of luck involved with your early success?
Yeah, I think there’s always a case of being in the right place at the right time. There’s a little bit of luck and a hell of a lot of hard work involved.

You’ve had many highs and lows throughout your life. Would you say these experiences have shaped you into the artist you are?
Yeah completely – I think every experience you have helps to craft you. We could talk for ages about the whole nature/nurture discussion but I think your experience does craft who you are.

How would you say that your music has developed over the last few years?
It’s just progression I suppose. I’m comfortable as an artist now. I’m comfortable with my recording voice. I’m good when I go into the studio, it doesn’t take me >> long to  get  into it. However,  I think it’s always something you can get better at, there’s no limits and there’s always room for improvement.

You have a wide coverage in terms of music you have produced. Which genre do you feel more comfortable producing?
I’m easy; it just depends on what mood I’m in. A lot of people feel constrained I suppose, if not by themselves, by what other people expect from them. I don’t mean this in an arrogant way, but I don’t care so much. I try not to think about what other people want because as soon as you start second guessing yourself you run into trouble. So whatever happens naturally?… Yeah if I’m in a bad mood I’m not going to make an “I Need You Tonight” do you know what I mean? There’s more than one side to me and there’s definitely more than one side to my music and it’s just a reflection of that.

Are you still in touch with friends from when you were growing up in Hackney?
Yeah some of them. What was their reaction to your rapid rise to fame? For the most part, everyone has been happy for me . Were a lot of your friends into the music scene? Some of them were. I had a lot of different groups of friends. Some of them have no interest in music whatsoever but there was one group of people that I knew growing up that were always making music. One of them, Alex (Cores) actually ended up being the executive producer on my first album. He’s one of my oldest and closest friends. If he’s that involved in my project then he must mean a hell of a lot to me!

What do you guys get up to in your spare time?
Right now I’m walking the dog! What type of dog have you got? A little staffy, he’s 3 and a half. What’s his name? Alfie!

Have you got a girlfriend at the minute or have you got your eye on anyone special?
I’m in a pretty stable relationship which is quite new and quite a rarity for me [laughs]. But yeah it’s easy for once so it’s cool. 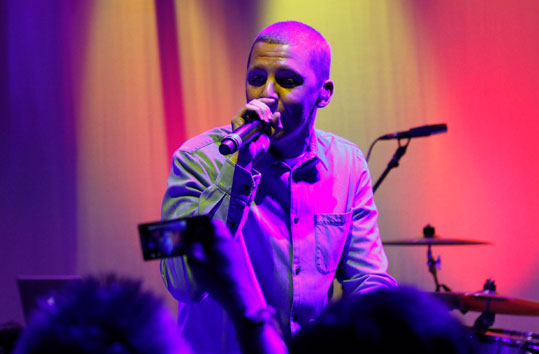 What would Professor Green do for a lady on Valentine’s Day?
I haven’t thought that far ahead, but nothing cheesy. People seem to make a big deal out of birthdays and Christmas and stuff like that. I don’t think it should be because you feel pressure to do so. I think you should do it when you want to. I think it means more that way.

What was it like working with Lily Allen?
Amazing! She’s a wicked character. We really get on well. I read that you struck a chord with her and that you are both very honest and open with what you say. Yeah, we don’t mince our words. What you see is what you get. Yeah, I think that’s the best way. That way people don’t get mixed up. People don’t think that they’re getting into something that they’re not. I think there’s a lot of that missing. People call her brash. I don’t think she’s that at all. I just think that people are a little bit too shy of the truth. I think that’s important and it’s missing in music. So much of it is manufactured these days. A lot of people are scared to say what they want. They censor themselves; they think something and they go “no actually I’m not going to say that, I’m going to be a bit more conservative about what I choose to say”. There’s a lot to be said for saying exactly what you think and I’m willing to contradict myself in doing that. I think that’s part of growing as a person.

What’s your favourite memory from touring with Lily?
There’s loads man. There’s not one particular memory. Pick any of the shows, from the beginning to the end. Like the first show I did with her through to the last show at KoKo. And the show we did at Wembley to 75,000 people. How did that feel? Incredible, there was a really good response that time. It’s cool watching the old footage, then watching the new footage and seeing the progression as an artist, I owe a lot of that to her.  It must be heart warming! Yeah completely and the thing is about Lily, she’s so generous. She did what she did without any ulterior motive; she did it out of the goodness of her heart. How many people do that, especially within such a competitive industry?

I was researching into “Just Be Good To Green” and I initially thought this was a remix of my favourite old school song “Dub Be Good To Me”…
That’s my favourite old school song too man. But no the original was by the S.O.S Band. So is this why you chose to remix the track? Yes, it’s one of my favourite childhood songs and that’s how Lily ended up on it. I was having just a normal natter with her on Facebook actually and I mentioned that I had agreed the rights to use the words and she said it was one of her favourite songs from her childhood as well. She asked to hear the demo so I sent it over and when she listened to it she came back to me asking “why don’t you let me do the chorus and we can perform it live at Bestival?” I was like “What the f*%k, yeah cool, we can do that!”

Any future collaborations in mind?
There’s loads of stuff coming up on the next album that’s already in place, but I really wanna write a song with Adele. I did a reworking of Hometown Glory and she heard it and got in touch after that. She’s a lovely girl. We actually did a show together years ago as kids. I’d really like to write something original with her.

Whilst we’re talking about your album (Alive Till I’m Dead), how’s your headline tour been?
It’s been nuts mate. It’s humbling man when you see the energy from the crowd loving the music. The fans I’ve got are wicked. We started off with a venue for 600 people in Birmingham and it sold out. Then it got upgraded and sold out again and we ended up doing 3059 tickets and we were four over capacity! That’s my first tour so yeah it’s wicked man.

What’s your favourite track from “Alive Till I’m Dead”?
It changes day by day but at the moment it’s probably “Jungle” or “Oh My God”. The most personal track on there is “Goodnight” that has the most meaning to me. 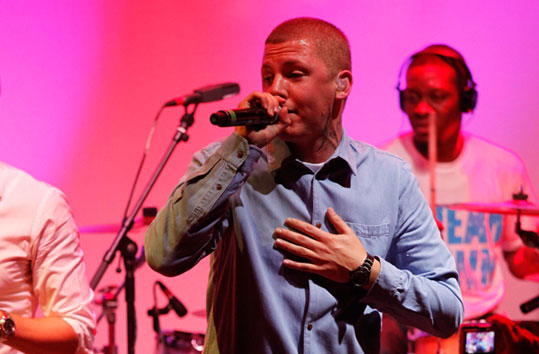 Artists such as yourself, Tinie Tempah and Plan-B have really improved the UK music scene in 2010. How do you feel the scene will continue to develop in 2011?
I think people are going to have to step it up. I don’t think that it’s a given that we have this continued support from radio and TV. It’s cool whilst it’s new but I think people are starting to see a backlash already. We’re gonna have to really keep it progressing to keep it to what’s relevant.

What’s the key to success in terms of remaining at the top of your game?
To stay motivated. I always wanna better what I did last time round. I’m not really in a position to talk coz I’m only on my first album but ultimately that’s the key, motivation!

What are your long term goals in the music industry?
To remain relevant and to be able to keep making music that connects with people.

How would you describe your fashion style?
I dunno probably high-brow street!

I read on Twitter that you lost your favourite jumper in a taxi recently…
Argghhh mate I lost my Margiela knit! I had just bought it and I left it in the back of a black cab. If I was to go and buy it again that’s £700 on one jumper! I’m not happy at all. Inside I am throwing things around my room at the moment but I’m trying to keep a lid on it.

Lets change the subject… How did the BBC Teen Awards come about?
I was asked by the BBC to perform and be on the panel. I kinda walked into the panel not really understanding how heavy it was going to be. You find yourself reading stories and they’re all deserving. To pick a winner is not easy, especially when they have all been through so much.

What advice would you give to people going through hard times?
You just gotta keep your head on your shoulders. It’s hard. Some people don’t have anyone there. I’ve been fortunate in that I’ve always had my Nan. No matter what I went through I always had her and some people don’t have that, but I don’t like preaching to people. You can’t always tell someone “It’s fine, it’s going to be ok”. The truth is in the character to see if they can make it through. I wouldn’t really know how to advise someone in that situation. That is what scared me about the whole Teen Awards. It’s really easy to get down and complain about things but when you read the stories about the people that were nominated it’s a real wakeup call. It reminds you of how lucky you really are.