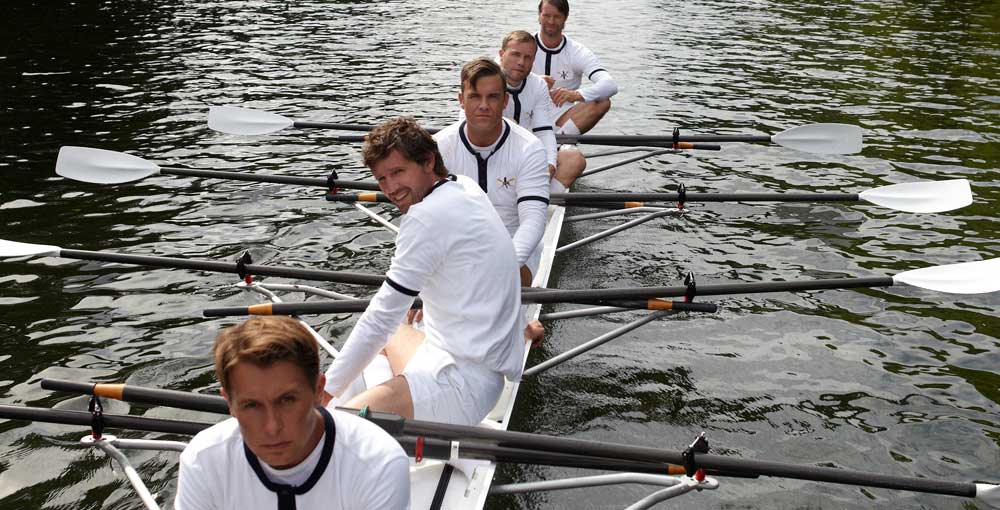 It is one of the most compelling stories in all of British pop history. To say that the reunion of Take That as a fully fledged five-piece is wholly unexpected would not be enough. The prospect of Robbie Williams rejoining the band to complete the original, early Nineties line-up seemed remote in the extreme…


“It’s always been my hope that we would do something together again, but I thought it would happen when we were all about 65 years old” comments Mark, “thankfully it’s come 25 years earlier”.

The band members all seem truly surprised that they have got back together, “10 years ago I never thought we would get back together, or that I’d ever go back on stage again. At different times it has felt both possible and impossible” says Gary.

In fact, it seems that Robbie was the only one thinking the seemingly impossible, “I’d always thought about writing an album with Gary and Mark, the thought’s always been at the back of my mind to get back together”.

The band has come a long way in a short time; friendships have been repaired and in some cases built for the first time. Five men, genuinely united – perhaps for the first time – making music together, on their terms.

Let’s rewind to July 1995 when Robbie appeared on stage with Oasis at Glastonbury; a strong statement that he wanted to break away from his boy-band image. Shortly after, a million hearts shattered when he momentously walked out on Take That. Despite Robbie’s huge solo success, he makes no secret of his distress about the treatment he received during his time in Take That. There was anger, resentment and sadness on both sides.

“Robbie was a baby when he came into it and he didn’t know any better. He was growing up and he had just had enough. Unfortunately it was all left in the wrong way.” Howard reflects.

“He wanted a voice; we all should have had a voice. I think he was a frustrated writer. I think he should have been encouraged to have been a writer early on and didn’t get that” explains Gary, “He only ever got rejection from me. I wanted to do all the writing and all the singing as well. I never encouraged Rob to sing”.

“The reasons why Robbie left Take That at 21 years old were half because he needed to go fulfill his destiny, and half because people got annoyed with him and encouraged him to leave” Jason says regretfully, “I beat myself up for a good couple of years for being the spokesperson when Robbie was leaving. In my effort to integrate myself with the management I joined with the lads in suggesting he should go”.

“I didn’t make it easy for them” Robbie confesses, “It was difficult enough for them without one fifth of the team self-destructing. We were all working class lads, all teenagers given the golden ticket. When you believe that’s the golden ticket, that this is your one chance to make something of yourself, you sort of follow blindly”. 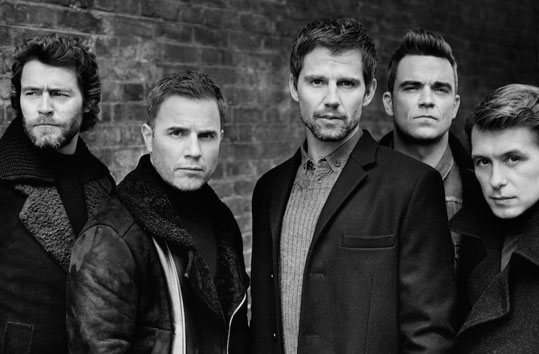 Without Robbie, the group continued as a  four-piece until February 13th 1996, when they announced their break-up at a press conference in London. Take That’s break-up made the lead story on the BBC evening news, and The Samaritans set up a special hotline for distraught fans.

Each member had been affected in different ways by their time in Take That, and by their experiences away from the band.  Mark, speaking of his troubles with alcohol reflected, “When I was in rehab I was able to look back over my life a lot and think about the band. There was a time when I was like, I can’t ever go in a studio ever again, I can’t do this”.

Meanwhile, the well publicized feud between Gary and Robbie was more poignant than ever. Robbie admits, “My problem has always been with Gary, it always was with Gary”.
While Robbie had scaled unimaginable heights of popularity and acclaim, Gary’s career had started promisingly but then stalled. “It was hard watching Rob getting further and further into the distance and I just seemed like I’d gone 10 steps back” tells Gary. “It was like a constant daily mock. It followed me everywhere I went, I just felt like a total loser”.

Mark’s solo career had been longer but less commercially successful than Robbie’s. Howard had returned to his first love, dance music and Jason went back into education. It had been a difficult time for everyone.

An ITV documentary was proposed to Mark, the tenth anniversary of Take That’s split. The documentary was a ratings winner and as a result, on November 25th 2005 Mark, Howard, Jason and Gary announced a British tour. An album with producer John Shanks followed, opening a new chapter in a book we all thought was closed.

“Initially we decided the best way to do this was to do it under a different name” explains Mark, “We came up with ‘The English’ as a band name. What the new name did was it freed us of what we were before-hand. We didn’t feel we had to make a ‘Take That’ record”.

This initial idea was then decided against, in favour of the old recognisable band name. The reformed Take That released ‘Beautiful World’ in 2006 which went eight times platinum in the UK, equating to over 2.5 million album sales.

Robbie and Take That had maintained an on-off communication throughout the period of the group’s second coming. In the aftermath of ‘The Circus’, in the summer of 2009, as Robbie was preparing his own solo album, he and Gary socialised in Los Angeles and tentative plans were made for a song-writing date.

The guys were ecstatic, “With Rob onboard it reinvigorated my excitement” says Jason. Plans were made, songs written and the wheels were put in motion for a Take That reunion.

Robbie however, though initially excited by the idea decided he was unable to go through with the plans, “I wasn’t very well; physically I just didn’t feel as if I had the energy to do it. It was a scary prospect to be out there amongst something that was so huge, feeling so depleted of life force”. 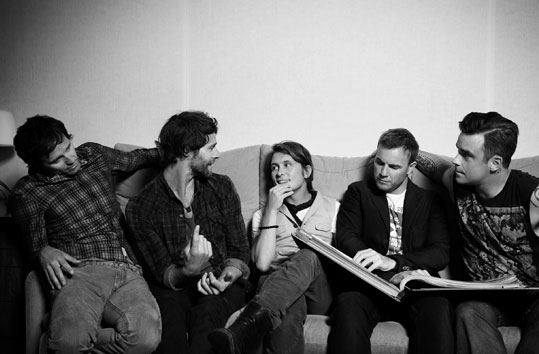 The others were hugely disappointed, “We had written hits, that was my problem. We had big songs already written and it was like what a waste!” explains Gary.

“I remember sending Robbie an email saying this is about our life.  This is about the five of us” says Howard.

It was Mark who managed to get Robbie back onboard, “I went round to Rob’s house a couple of times, because it’s just better if you can talk to each other I think. We worked it out that day, we said forget about a year, let’s just say we make this record, look at how many days it’s going to take us max. It’s going to take about 30 days of you being in the studio this year, do you want to do it? Yeah I wanna do it, well do you have 30 days to spare? Yeah I’ve got 30 days spare, well right let’s do it.”

Shortly after that, in New York last September, the famous five were reunited. “Getting the five of us in a room together, although always a dream, never actually seemed like a reality,” says Mark. “Now the reality of the five of us making a record together feels like a dream. It’s been an absolute delight spending time with Rob.”

“One big revelation this time around was how much I loved everyone’s company. I wasn’t interested in that the first time. I’ve loved being a part of their lives” tells Gary.

Robbie explains that the long-standing friction between himself and Gary has been resolved, and how close they are now, “When two grownups meet and go here’s my truth and you go yeah I’m sorry, you realise you only hurt so much because you love them so much”.

It was, says Robbie, “Like coming home”. But it was more than just that. It was the coming together of two mighty forces that could have either destroyed each other or created something even more powerful. Gary explains, “It couldn’t be us sounding like Robbie’s last record and it couldn’t be us sounding like our last record. We had to adopt some of what Rob does and some of what we do”.

You only have to look at recent statistics of their sold out ‘Progress’ tour to get an idea of which way it’s gone: over a million tickets were sold in eight hours and 1.34 million in total making it the fastest and biggest selling tour in UK history.

“Now Rob’s back in the band maybe it’s time for us to make peace with the whole thing, to reflect a little bit on the journey” says Mark.  And what a journey it has been!

After 20 years, 80 million albums, 14.5 million concert tickets, 19 BRIT Awards, 13 number one albums, 17 number one singles, eight MTV awards and five Ivor Novellos, as a boy band, a man band, as solo artists, as friends and enemies, at long last Take That are here as something new and refreshingly uncomplicated: a grown up pop group and a band of brothers.

“Life is beautifully strange sometimes,” says Jason, and Take That are undeniably thrilling proof of that statement.