Hello Example, what have you been up to?! I’ve been in Ibiza all summer. I flew back yesterday and went straight to a TV show. I’m flying back to Ibiza Monday. That’s my 11th and last visit of the summer. I did Majorca and Ibiza in the same night on Tuesday.

Can you talk us through a typical day? Wake up, go to the gym every morning if I can or for a run at least. Usually a photo shoot, or a few interviews in the morning. Then either rehearsals or a radio show in the afternoon or maybe another photo shoot. Then evenings are either a DJ set, a club PA, a live show or a festival. Put it this way, I’m working everyday from about 10am until about midnight. Some mornings I’ll have to get up earlier if there’s a breakfast show, about 7am.

It’s been another massive year, with the release of your 3rd album, a 3rd headline tour, festivals galore, and a number one single. When is the Example juggernaut going to slow down, if ever? Well I haven’t had a holiday for a couple of years and I’ve probably only had about three or four days off this year including weekends. So I am thinking maybe I’ll slow down in January and I’ll have a couple of weeks off. My manager said I can go to Australia for a few weeks and chill. But as soon as I come back to the UK in January I’ve got another single out and I have got a European tour which is about 20 gigs. Then I’ve got Australia and the Far East and my record label want me to write another album for next year, which will be my fourth album in five years.

Is that a lot of pressure for you? No, I find it really easy to write. I wrote this third album in six months. I’ve just got to be in the zone. So long as I have got inspiration and all my inspiration comes from real life, so if I’m going through sh*t in everyday life in terms of relationships or partying and living it up excessively, then I find it really easy to write. It just relies upon producers giving me their best beats.

Can you talk to us about the single you made with Laidback Luke ‘Natural Disaster’… I got sent the beat which was incredible and I thought “I need this on my album”. They told me “Laidback Luke has already got it as a single as an instrumental, so you can put it on the album but it will have to be Laidback Luke Vs Example”. I was like “that’s fine” and I wrote the song in about an hour, recorded it in an hour, then sent it to Luke in Holland and he finished it off. I suppose what you hear is the fruits of our labour, it is what it is. It’s quite a special track. I think it’s going to be huge at festivals and in clubs.

The 4th track on the album, ‘The Way’, produced by Faithless, definitely has that epic festival feel to it, which is found in so many of their tracks. Is that where you want to be in the future; creating and playing an epic sound dominating dance music? I don’t produce stuff so I am always going to have to rely on other producers. Certainly Faithless were seen as the kings of the dance arena, or of the main stage dance act. The Chemical Brothers are brilliant. Chase and Status are brilliant. Essentially those guys are producers. They rely on visuals, amazing lights or featured artists to make their shows work. Whereas with me, I don’t have any featured artists or visuals to make my shows work. It’s a band and we play like a unit. So I suppose in that sense I am more similar to Faithless in terms of drums, guitar, keyboards, lead vocalists, front man. I am really inspired by them. I supported them on their arena tour and I kind of feel like they have handed over the baton to me to continue their good work. If they are willing to produce for me on my album then they obviously like what I am doing. 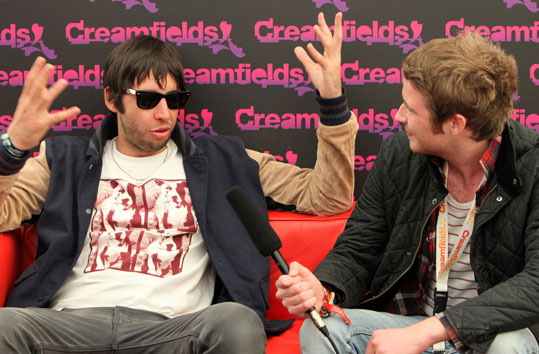 Who have you most enjoyed working with producer wise? I’m blessed; I have been working with all of the best people in the world. Chase and Status, Nero, Skream, Dirty South, Laidback Luke, Faithless. They are all different. Some are more perfectionists than others. Some people work really quickly. Some people work slowly. Some people like to sit in the studio and get drunk. Other people want to be completely sober and done by 6pm, so everyone works differently. It was fun working with Skream because he is a really good mate of mine and we recorded the tracks in half a day and then went out and got really pissed. Then you work with people like Faithless and Laidback Luke, you record with them and then you don’t see them again for another three or six months.

Did you have a feeling that your single ‘Changed The Way You Kiss Me’ was going places, or was it a complete shock to see yourself at top spot? I knew it would be massive but I don’t think you can ever predict if you will be number one because you don’t know who else is out that week. Some weeks you are up against Lady Gaga or Katy Perry and they are always going to outsell everyone in the UK because they are so massive. So it’s kind of hard to second guess where you are gonna go. I had the same feeling after ‘Change The Way You Kiss Me’, as I did after ‘Kick Starts’. As soon as I heard it I knew it was going to be huge.

In your first album, you only sing in one of the choruses, whereas now in the third you’re singing throughout it. How have you found this transition and what was behind the decision to sing more? I only originally started singing because I was demoing choruses for other people. On my first album I sung the chorus for ‘Me and Mandy’ and then got someone else to come in and sing it for me. And like you say, on the rest of the album I only sung the chorus for one song. On the second album I started demoing more and more choruses with the expectation that other people would come in and sing them. Then the label turned around and said “No you don’t need to re-sing them, your voice sounds good”. So that gave me confidence to sing more and on this third album I have sung everything.

So, what’s next? I’ve got this arena tour in April, so I wanna sell that out. I think once you get to the arena level, that’s a huge statement. More European festivals and Australia. I am not really bothered about America yet. It’s such a huge beast to tackle. You have to give up a year of your life to achieve anything over there.

What’s the best festival you have played at? They are all good, they are all very different. Sometimes you can be in a tent late at midnight and have an amazing vibe there like at Big Chill. Or you can do something like at V Festival where you’re on at 4 o’clock in the afternoon but 50,000 people are bouncing. The response we got at V this year was amazing, we had the biggest crowd they have ever seen on the second stage. We had three times as many people as Pendulum. It was basically a mosh pit with 50,000 people. It was nuts!

For more info on Example go to:
www.trythisforexample.com