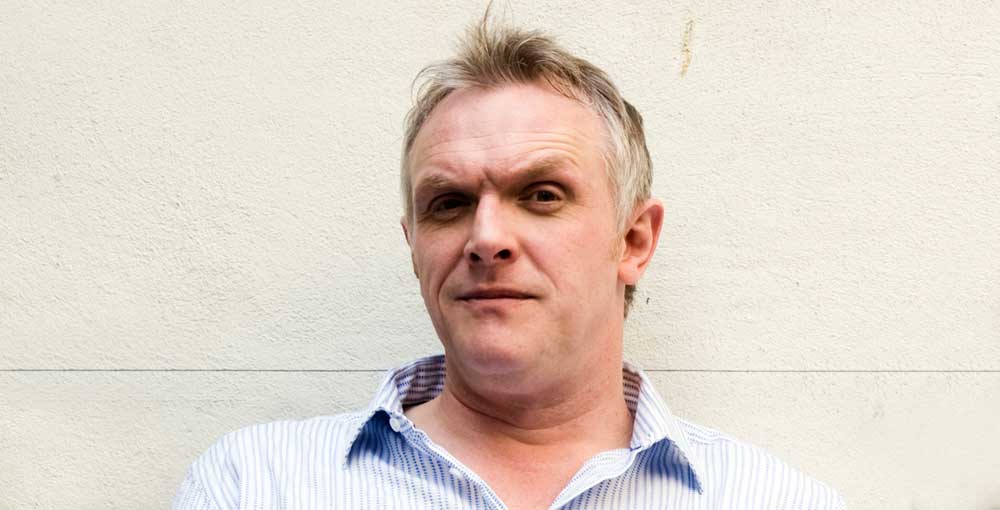 Now we all know him as the brilliant Mr Gilbert, everybody’s favourite TV teacher, but the man behind the madness is now taking to the limelight on his own accord. Having just finished his first solo stand-up tour alongside regular appearances on the box, Greg Davies has consolidated his place amongst the ranks of the UK’s comedic elite. We caught up with him to discuss his time as a real teacher, a horrific deleted scene from ‘The Inbetweeners Movie’ and his time in Nepal amongst other things.

We should start off by talking about your stand up tour, ‘Firing Cheeseballs at a Dog’. It sounds like a very dodgy metaphor for something but it is actually something you did.
Yeah, it’s just literal; I did actually fire some cheeseballs at a dog!

How did that come about?
I was on a mountain with Marek Larwood, my mate, who I used to be in a sketch group with and there was a dog that was blocking the path of our hire car. I had a big bag of cheeseballs and Marek had a catapult, so we just fired them in the dog’s face. It’s probably one of the reasons that the story stuck in my head really because the dog just didn’t give a sh*t! It was a really strange reaction; there were cheeseballs bouncing off his head and he couldn’t have been less interested.

Not a care in the world?
No! It was almost as if it wasn’t happening; as if he was in denial.

So the tour is now on DVD, with a beautiful cover I must say!
Well, do you know what? It’s just something for the girls! The primary objective of releasing a DVD is to be funny, it’s a comedy gig, but you’ve got to look after the girls as well; you’ve got to give the girls something, so that’s just my little gift to them, that picture.

And the length of the tour Greg, it started off in 2010?!
Yeah it’s ridiculous isn’t it? My management and I booked in 40 dates originally and that would have all been over some months ago, but people came to it which was a great surprise; so I ended up doing 120 or something ridiculous like that.

I’ve always felt with comedy that it’s quite open, you know, with personal stories and references to family and stuff like that. How do you feel talking about these things in such  a context?
Well, I feel fine about it because my family have always made me laugh. So it seemed like an obvious starting point for my first full show, really, to talk about the fun we had together. I think a lot of people perhaps think I go too far and that I say dreadfully rude things about my parents but they’re in on it; they’re in on the joke so they are quite happy for me to say whatever. I’m really pleased to be talking about them. You know I don’t wish to be cheesy but it’s quite nice, quite comforting talking about the people you care about the most, continually, every night!

Now, The Inbetweeners movie. A massive success...
Yes, really enormous, amazing really; I mean we all expected people to go and see it because the series was so popular but to be as big a box office success as it was is just incredible. Well done the writers; thoroughly deserved I think; they did a great job writing it.

Did you ever expect to appear in a film?
No I didn’t. I never expected to sit in a cinema and to watch my stupid fat face, so it was a real novelty and really great. I will say there is a scene of mine in the film that got cut, that is, in the extended version of the DVD which is so disgusting, sooo disgusting. If you think I look revolting on the DVD cover, you should see that extended version of the film and see the true horror of it.

Can we get any more details?
No I’ll leave it as a surprise for you, but don’t be eating when you watch it. 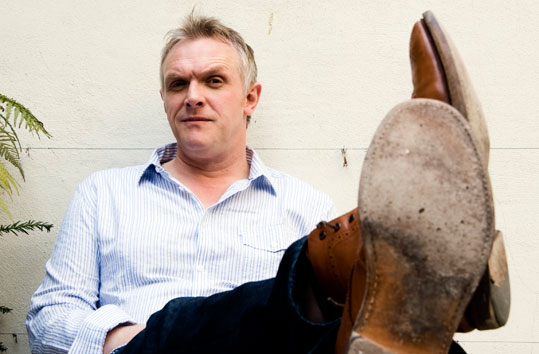 Mr Gilbert does not have a huge role in the movie, but I was thinking if there was to be, say, a ‘Mr Gilbert – The Movie’, and you were to direct it, how would it go?
Erm…  I don’t know! I’m really fond of Mr Gilbert but, at the end of the day, he is a psychopath! He is a lunatic. And don’t get me wrong; when I was a real teacher I taught with people who were just as disturbing. The question is, with a character like that, he just comes in and acts like a psychopath every now and then; so if you extended it, where would you take him, you know?

You have said before that as a teacher you were nothing like Mr Gilbert?
No, that’s one of the reasons why I play him the way I play him I think; apart from the obvious, the lines, you know. The reason I bring that hatred of children is because I was always envious of those teachers who walked into a room and the kids would go quiet. I was never one of those teachers; I used to have to come in and dance about and scream to get them to shut up!

Commanding respect?
Yeah, more like begging for respect! Whereas, you know, going in with an arching eyebrow where everyone goes quiet. I taught with loads of teachers like that who were amazing.

Can you remember the angriest you’ve ever been with a pupil?
I can yeah. I chased a pupil through the school. (Laughs.) It’s terrible isn’t it?! A six foot eight man chasing a fifteen year old boy. I don’t know what I expected to do if I caught him but fortunately he was faster than me. I was running across the playground after him and I remember thinking ‘I don’t care, I’m going after him’, because he wound me up so much. Then I realised the whole school surrounding the playground was watching, standing up looking out. So I sort of went down to a trot and really slowly turned round. It was a humiliating climb down.

What did he do?
It was a boy who I’ve seen since, who’s now well into his 20s, and thoroughly charming when I met him as an adult. But I was telling him off for being really rude to another teacher and while I was telling him off, he was going “Blaa blaa blaa”.  So I went, “Please stop doing that”. He didn’t, then that’s when the chase happened.

I suppose it’s quite an unexpected transition to go from being a teacher to a stand up comedian, but in some aspects you still have to almost command the attention of who you are talking to. You know you have a classroom in front of you, same as with a comedian; you have a whole audience in front of you to connect with. But it’s not two professions that you would instantly put together.

It’s not, but there are a lot of similarities. Commanding the attention of a room full of people who aren’t necessarily going to do what you want, you know, it’s not that far between. Especially when you’re on the club circuit, when people don’t know who you are, it’s not that far from being a teacher; it really isn’t. So I think I was given an unfair advantage in a way because I was used to just getting people to be quiet!

When was the defining moment then, how did you go from one to one?
I was 33, so really old to start, and was going out with a really practical, pragmatic Australian PE teacher, my girlfriend at the time.

Oh, very nice, PE teacher…
Yep, I was batting way above my average! So she just turned round to me one day and went, (Australian accent) “Why don’t you just stop going on about it, go and be one”. And I just thought, oh, maybe I should; so it was her really. She sort of ‘common-sensed’ me into it.

I read somewhere you went to a stand-up class or school was it?
Yeah I applied for a course, a brief stand-up course. It’s still going now, run by a brilliant bloke called Logan Murray. It was for eleven weeks, once a week, trying ideas out with a group of people who were half dabbling with stand-up; so it was a great place to start. It’s a great place to start messing about and trying new ideas out.

And obviously stand-up has propelled you onto the national television scene; you’ve been on countless panel shows!
Recently I have, yeah!

And you went to Nepal with Rhod Gilbert recently?
I did.

Quite a strange concept for a TV show, ‘World’s Most Dangerous Roads’.
Yeah, sending two comedians up a deadly path! It was great fun though.

Did you take much from the experience?
Yeah it was amazing; one of the most amazing things I’ve ever done. If you saw it you would have seen me say that I didn’t travel when I should have. When I was your age I should have done all that business, but I didn’t so it was like catching up; it was amazing actually. I felt like a wide-eyed teenager running around!

A vastly different culture as well.
Oh God yeah, shocking. And all the clichés are true, you know; such a poor country but they are all so much happier than us. I loved that, and loved doing Ask Rhod, and I recently got to host Never Mind The Buzzcocks.

Was just about to say, you ruined Tinchy Stryder!
I did not! Me and Tinchy are tight man. I thought he was great fun, and he did the best joke of the show about my age when I asked him how old he thought I was, and he said, ‘About a Range Rover’.

So finally, a question from Facebook. James asks, “Are you more interested in sketches or stand-up?”
I think I’m not more interested in one or the other. I think if you’ve always wanted to do something, like I had always wanted to do comedy, and you come into it late, and finally get the chance to do something you have always hoped you would do, you want to get every single slice of the cake and ram it all in your fat face at once! So I love sketch comedy.  I love narrative, which I’m writing at the moment, and I love stand-up; so yeah, it’s all bloody marvellous.