Modestep are a young band who are pushing boundaries. Enchanting crowds across the globe with a new brand of ‘live dub-step’, their electronic sound has hooked the ears of many and seen them establish themselves as a force to be reckoned with. We caught up with the excitable lads via speakerphone, which, was interesting to say the least! Modestep are Josh – vocals and production, Toby – guitar and production, Matt – drums and the quieter Nick, who also plays guitar.

So you’re coming to the end of your UK tour with Lost Prophets. How has it been?

Matt: It’s been pretty intense, all of us lost our minds through alcohol and we no longer have rational thought.

You guys recently made your US debut, how did you find that?

Josh: Ah, that was unbelievable. We didn’t expect to sell out the venues; we only put the tickets on sale three weeks before the shows. The crowds were unbelievable really; really fanatic!

How did you find the reception in the US compared to the other venues you have done in the UK for example?

Matt: It’s a lot more fanatic. They queue up after shows and want photos and signatures, they do it in the UK but over there it’s much more of a big deal.

Josh: It just has more of a dance feel to it. Kids there turn up in spandex and glow sticks, and stuff like that, whereas over here they wear caps and hoodies. Rudeboys basically!

How have you found it performing with a band of Lostprophets stature?

Josh: It’s been a good opportunity to expand our fan base. I think it’s shown to people who don’t believe that electronic live music can be as rocky as rock music is, that we are a real band and can live up to bands like Lostprophets.

The reception you guys have been getting online has been massive, YouTube especially. How have you taken to it all?

Josh: Yeah it’s something I’ve always been involved in. Before the band I was doing online media for musicians so it was quite natural using the platforms for Modestep.

Matt: The response has been great. For the first few million hits I used to read every single comment and every single thing that was online. But now I’ve realised that people who comment online more often than not are idiots. I now try and take a step back and just look at the statistics really. But yeah, the response has been ridiculous, really can’t get my head round how mad it has been.

Toby: Someone said Matt looked like Cher in a wig!

Josh: I found a really interesting one where someone had really read into one of our videos and thought it represented a battle with the American music industry. I found the whole ambiguity of it all quite interesting and how someone would read into something that much. 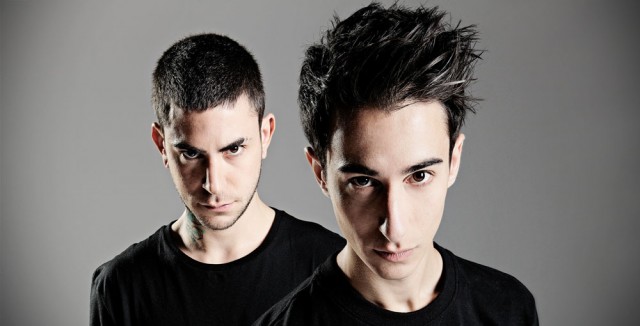 Can you tell us a little about your debut album, ‘Evolution Theory’?

Josh: Yeah the album is finished. It’s been finished for quite a while now so we’ve just got to wait for the record label to get off their arses and give us a release date!

And your new single, ‘Show me a sign’. What’s the story behind record?

Josh: It’s basically a song which we wrote for the fans who have been with us since day one, you know, like a thank you for everything they have done.

Were any of you guys at uni or working in the music industry before Modestep took off?

Josh: Tony was at uni studying sound design, I was designing underwear!

Josh: Yep, bloody great underwear. I also worked for a technology company called Apple. Who I won’t mention the name of! Matt, what were you doing?

Matt: I was selling advertising for one of my father’s old magazines and standing on street corners offering sex. Nick?

Nick: I was working on my Dad’s noodle bar! Can I just give a little promo for him? The restaurant is called, ‘Wok and Roll’.

Have any of you guys got annoying habits?

Josh: Matt get’s annoyingly drunk and annoys everyone! That is the most annoying of all habits. Matt has this alter-ego when he’s drunk called, ‘The Earl’. For some reason he transports back to 1940 and is a Victorian gentleman.

Toby: He’s not a gentleman!

Matt: I really don’t know what they are talking about!

We have a question for you sent in on Facebook. Flo asks, “When are you coming to Germany?”

Josh: Yeah we’ve been to Germany a few times and intend to come back.

Nick: Have we been there live?

Josh: We did a couple of DJ sets out there, but I’d like to take the live show there. But it’s not up to us, it’s up to promoters and our records to raise it on the promoters radar. So let all your promoters know!

Obviously you guys have taken Dub-Step to a live stage. Did you find it quite challenging at first?

Josh: Not really, we were all from rock bands in our background so it was all quite natural and something we didn’t really have to think about. The only difficult side was the technology to make it all seamless and actually work together, but other than that, it was natural and quite organic.

Can you remember your first show as a live band?

Josh: Yep, it wasn’t that long ago! It was about ten months ago at Download festival. That was our first ever time.

How did it go?

Josh: Really, really well. We thought we were going to get bottled on stage because of it being a rock festival. But the tent was completely spilling out the sides and was actually one of the greatest ever shows we’ve played.

So, finally, what have you guys got lined up for the summer?

Josh: We have the new releases. The album is coming out. We’re going to Australia, America, festivals in the UK. Basically a whole bunch of touring now. Hopefully we will be on the up!