What a night! The three words which instantly spring to mind when looking back at what truly was ‘The Ultimate House Party’. After many months of planning and many weeks of waiting, the special night finally took place this summer, which for one person in particular, was a night that will never be forgotten. Ed Sheeran, double Brit Award winner, with a platinum selling debut album, countless singles in the charts and an overall popularity which can’t be put into words, made the dreams of one north London student come true this May; performing an exclusive secret garden set in the presence of her closest friends and family. 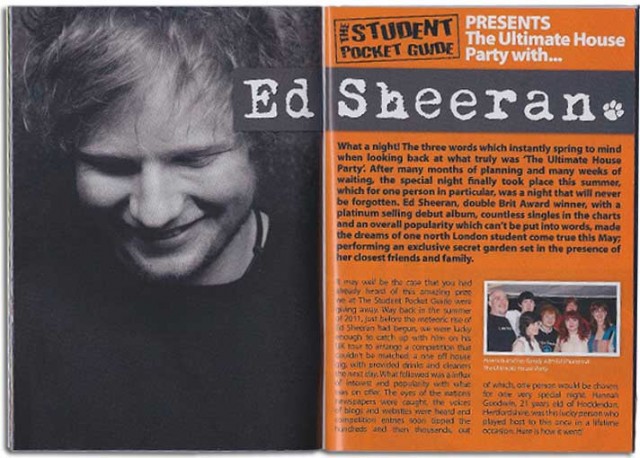 It may well be the case that you had already heard of this amazing prize we at The Student Pocket Guide were giving away. Way back in the summer of 2011, just before the meteoric rise of Ed Sheeran had begun, we were lucky enough to catch up with him on his UK tour to arrange a competition that couldn’t be matched: a one off house gig, with provided drinks and cleaners the next day. What followed was a influx of interest and popularity with what was on offer. The eyes of the nation’s newspapers were caught, the voices of blogs and websites were heard and competition entries soon tipped the hundreds and then thousands, out of which, one person would be chosen, for one very special night. Hannah Goodwin, 21 years old of Hoddesdon, Hertfordshire, was this lucky person who played host to this once in a lifetime occasion. Here is how it went! 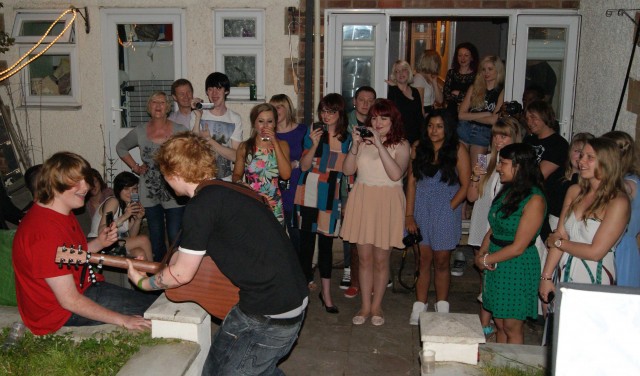 Simply put, it couldn’t have gone any better. Great people, great setting and of course, an unforgettable performance by Ed Sheeran. The months of hard work came to fruition with everything coming together perfectly; even the sun came out to catch a glimpse of the nation’s favourite red head!

Many of Hannah’s friends had no idea what was going on when we first showed up at her house. “Why are there cameras here?”, a few of them whispered to each other. And when Ed casually walked through the front door, then out into the garden, you can imagine the utter shock splattered on their faces! After mingling with the crowd and greeting Hannah and her family, Ed exchanged a few words with us sat on a bench at the back of the garden, in front of an eagerly listening crowd. “You know what?”, he begins,  “I’ve done so many back garden gigs. It was actually how I used to make a living; going around student houses with a bag of CDs making £100 a time.”

We went on to discuss his recent time spent in America on tour with Snow Patrol; a tour which he unfortunately had to cut short by a few shows in May. That aside, Ed went on to explain how things over there have compared to his journey in the UK. “It’s very similar to how things were last May in Britain. We’ve started creating a small buzz over there, so hopefully it builds.” His focus since has shifted back to the UK, having played a series of shows and festivals. Many of you Ed Sheeran fans I am sure would have seen his brilliant performance at BBC Radio One’s Hackney Weekend on TV, or, if you were lucky enough – at the show, which was a highlight it seems for so many artists this summer. There is always one venue or festival, however, that is a particular favourite that lives long in the memory for many artists. For Ed, this was Reading 2011. “It was mental. I played the Festival Republic tent and it was so good. Very, very fun!” 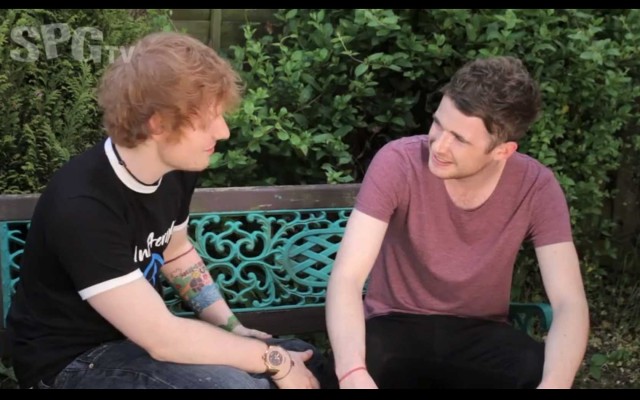 As the conversation went on, we spoke about Ed’s love of cucumber (randomly), future records he’s been working on and Lego building amongst a host of other things, including the possibility of a headline arena tour. “Arenas are difficult to do because you have to hold a crowd for one and a half to two hours; and I don’t have a band so I’d be doing it on my own. As soon as I have enough songs to be able to do a good set, I’ll play an arena tour!” One thing we didn’t have to wait to see was his latest tattoo! As he showed us and everyone there, he explained the story behind his latest addition. “I grew up next to a cafe called ‘The Dancing Goat’, which my best friends own. I walked to school with them every day for like seven years, so I thought I’d get a goat!” We spoke a little more then closed the interview to a rapturous applause, which signified the moment that everyone had been waiting for, Ed’s intimate set. 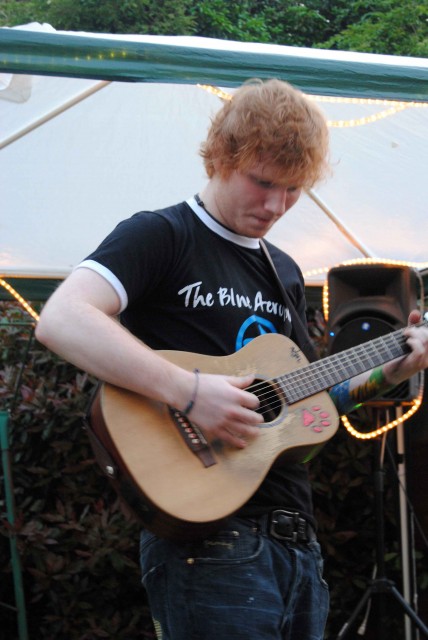 The garden was lit with outdoor lamps and candles, which coupled with the sunset, just as the gig was in full flow, created a perfect serene atmosphere. Out came the classics of ‘Lego House’, ‘The A Team’, and ‘Small Bump’, with all in attendance singing along and getting quite simply blown away. Even the mosquito buzzing around the sound recorder was having a blast! The “My my, my my” of ‘Give Me Love’ resonated around the garden, with everyone smiling as they repeated Ed’s famous lyrics. You could sense everyone there trying to capture the moment; realising that this really was a once in a lifetime occasion.

Then came the highlight of the night. ‘You Need Me, I Don’t Need You’, which even for Ed, was something special. As Ed began the second single from his debut album ‘+’, in the corner of his eye to his amazement, was Hannah’s brother, Niall, rapping and singing every word. Even the camera crew had to remove their headphones to believe what they were hearing!  The rest of the song soon became a word-for-word duet, with both guys going at it full flow, rapping lyrics, “I’m always doing shows if I’m not I’m in the studio; truly broke, never growing up call me Rufio; melody music maker, reading all the papers; they say I’m up-and-coming like I’m… (You know the rest!)”, which received the biggest cheer of the night.

It was the perfect end to a mesmerising set. The final chord was met with a great cheer, and as Ed stepped down from the top of the garden, he left a crowd ecstatic from what they had just experienced. “I’m kinda lost for words. I can’t describe how happy I am!”, Hannah told us afterwards. Her brother, Niall, was also left a little shell shocked. “I don’t realise what I’ve just done, I’ve just sung with a guy who has two Brit Awards! Amazing”, he told us with a look of disbelief at what just happened. Everyone congregated in the garden with drinks and food, still buzzing about with a childish excitement. Photos were taken with Ed; CDs, arms, legs and shoes were signed, and all attending had their final chance to have a few words with the man of the moment, rounding off an unforgettable night. 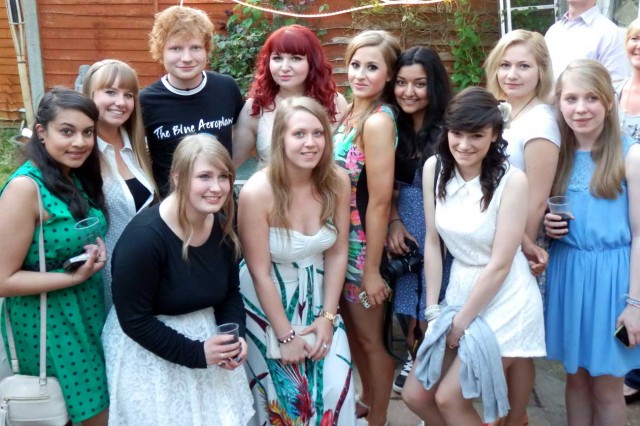 Seeing an artist of Ed’s calibre in an environment of such intimacy was a real privilege. It was an experience that we will never forget and one that we are truly thankful for. And do you know what the great thing is? You can watch the nights events unfold on our website and YouTube Channel, SPGtv! Make sure you check out ‘The Ultimate House Party’ video online and see for yourself what it’s like getting up close with Ed, catch parts of his set, including ‘The A Team’ ‘Small Bump’ and of course the epic ‘You Need Me, I Don’t Need You’, plus find out how you could win both an acoustic guitar and a copy of ‘+’, signed by the man himself!

We hope you enjoy it, and a huge thanks go out to Ed, Hannah and her family who made ‘The Ultimate House Party’ a night to remember! As Hannah put it, “Tonight was amazing. I think I’m going to remember it for the rest of my life…”