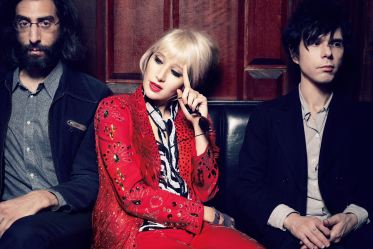 The band, made up of singer Karen O, guitarist Nick Zinner and drummer Brian Chase, will release the follow up to 2009’s ‘It’s Blitz!’, in April.

The record was produced separately by Dave Sitek (TV on the Radio, Jane’s Addiction, Foals) and Nick Launay (Arcade Fire, The Cribs , Nick Cave and the Bad Seeds), with one track produced by former LCD Soundsystem frontman, James Murphy.

O said of the record: “We took a more playful, LO-FI approach to songwriting. Much of the music was demoed in our little basement studio in Manhattan with drum machines, a shitty sample keyboard and tons of delay – which we called, The Soup.” She added: “I think this record has more moodier and tripped-out songs than you’ve ever heard from us. You might catch some roots reggae and minimalist psychedelia influences in there.”

Separately, Yeah Yeah Yeahs have been very busy over the last few years. O co-created a psycho-opera (with KK Barrett) titled Stop The Virgens, as well as collaborating with Trent Reznor for “Immigrant Song” on The Girl with the Dragon Tattoo soundtrack, Santigold and David Lynch.
Nick Zinner curated, composed and led an orchestral work titled 41 Strings, and contributed songwriting and production to Santigold’s album. Meanwhile drummer Brian Chase will be releasing an album of his solo project, Drums & Drones, on the Pogus Label in 2013.

‘Mosquito’ will be available in standard formats, and a limited edition bundle, both of which can be pre-ordered now from the band’s website.