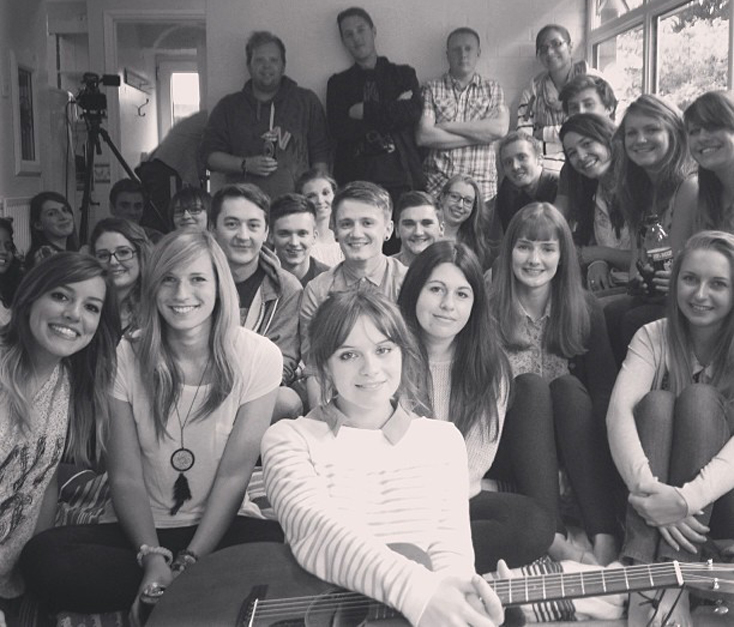 For the second year running, we have put on a truly amazing house gig for a lucky competition winner that will not be forgotten anytime soon. Yes, 2012 saw the dreams of a North London art student come true as she played host to a secret garden party with an exclusive performance from the one and only Ed Sheeran, all in the comfort of her very own digs. And this summer, we were at it again, naming third year UEA biology student, Alex Deverell, the winner of 2013’s intimate house gig competition, which included a mesmerising set from one of the hottest solo artists to emerge this year, Gabrielle Aplin…

With a number one single under her belt and gold certified debut album ‘English Rain’ peaking at number two in the UK charts, Gabrielle has hit the ground running at some pace in 2013. Her  version of Frankie Goes To Hollywood’s ‘The Power of Love’ over the Christmas period marked the start of what has turned out to be a memorable few months for the singer-songwriter, with following top ten single ‘Please Don’t Say You Love Me’ and top twenty hit ‘Panic Cord’ maintaining momentum before the release of her hugely successfully debut record.

“Everything has happened so gradually that it hasn’t really hit me. But it’s definitely built up to something, and when I look back and see what I’ve done in the last year or so, it is mad”, she explained to us.

After meeting up with Gabrielle and her team for a catch-up lunch on the day of the gig, we set off to Alex’s house which on arrival was packed with her closest friends.

“Hello, nice to meet you! I’ve come to play songs in your house”, Gabby said to Alex as she opened the door to let us in. “Lovely to meet you!”, the host replied with her excitement clear for all to see. “Come in!”

It was smiles all round as Alex took Gabby through to meet her friends from back home and university. Bruce the dog was Gabby’s honorary pet for the day and he was the first to lap up the attention of the room full of students. Fussing over the cute little puppy was the perfect ice-breaker and soon everyone was feeling at ease and the conversation flowed naturally. If anyone was expecting a too-good-for-us kind of celebrity, Gabrielle was the opposite. Dressed in skinny jeans, a long shirt and a stripey jumper, within minutes she was chatting away to everyone, fitting in perfectly, and even helping Alex serve drinks from the kitchen!

After the introductions and lots of puppy-loving, it was down to action in the students’ conservatory-turned-gig venue. It was decided that Gabrielle should perform sitting on the sofa, while the students should grab all the cushions and blankets they could find and set up camp on the floor around the sofa-come-stage. This caused quite a few laughs amongst Alex and her guests, with Gabby instantly feeling accountable for occupying the only real seat in the room.

“This is my first gig without my band this year, I’m really nervous”, Gabby stated before playing the first of her six songs. “And I also feel really guilty that I’ve got this whole sofa and you guys are on the floor!”

Even with the increased amounts of time spent in the limelight, the intimacy of performing to a room packed with eagerly awaiting fans still proved to jangle the nerves of Gabrielle when all was set for her performance. However, if she said she was nervous, it sure didn’t show.

The heavens that opened just as Gabrielle arrived at the student house would normally have been a disaster, but as it turned out, the pitter-patter of the rain against the conservatory glass only added to the intimacy of the gig. Everyone in the room could sense this was going to be a one-off experience, a very special moment.

Natural as anything Gabrielle sat on the sofa, tuned her guitar and introduced her first song.  A perfect silence came over the room; the atmosphere so tense yet so amazing, no one breathed a word. The first few bars of “Panic Cord” were played, grasping the attention of everyone present. “You kept all the things I threw away, a leaf I picked, a birthday card I made”, the first lyrics to resonate around the room. The atmosphere was breathtaking – each song met with warm applause.

“I may be sending you all to sleep, I usually have my band that make me feel way more rock and roll than I am!”, Gabrielle joked which was met with playful “Nooos!” from the audience midway through the set. “I’ll just check my set list which is on someone’s receipt…”, Gabby continued.

“Yeah, that’s mine”, a guy at the back called out. “It’s for a bottle of water, and some chewing gum”.

“I’m glad we cleared that one up!”, Gabby replied to a mass of laughter.

The second half of the set saw Gabrielle charm the room with “Please don’t say you love me”, sending goosebumps down the backs of a fair few in the room. Still the rain continued outside and the ambience inside was indescribable.

“I’m sorry it’s rained and that I’ve stolen your sofa. It does great things for my hair though, my fringe is looking awesome”, Gabby joked before introducing her final song. “This is going to be my last one. Thank you for letting me raid your house Alex, and thanks everyone for coming. This is Home”. Her latest release really was the fitting finale. If you would like to watch Gabby’s set by the way, good news is you can – all you need to do is head over to our YouTube Channel SPGtv where you can watch the day’s events unfold.

After the performance, guests had their chance to speak to Gabrielle who was more than willing to answer their questions and have pictures taken. The whole while, Brucey (the dog) was still embracing the masses of attention thrown his way. With Alex and Gabby both outside enjoying the reappearance of the sun, we had a little chat to reflect on the day’s events.

“I’ve played intimate gigs before, but not in someone’s house with all their close friends watching me perform. It was lovely”, Gabrielle told us. “Yeah it was awesome, thank you so much for letting me have it. It was nice to meet you Gabby as well!”, Alex grinned.

As with last year’s house party, the day’s events eventually had to come to an end and were rounded off with goodbyes and last chance photos. Gabrielle was also kind enough to sign an acoustic guitar, which you’ll be pleased to know can be won at our website: TheStudentPocketGuide.com/Competitions! All you need to enter the competition can be found there.

Plans are already being put in place for next year’s student house party, so make sure you follow us on our socials for all the latest news on that.

And finally, a massive thank you to Gabrielle and her team for making this once in a lifetime event happen, and of course to Alex, who really was the perfect host. We wish you all the best for this academic year.