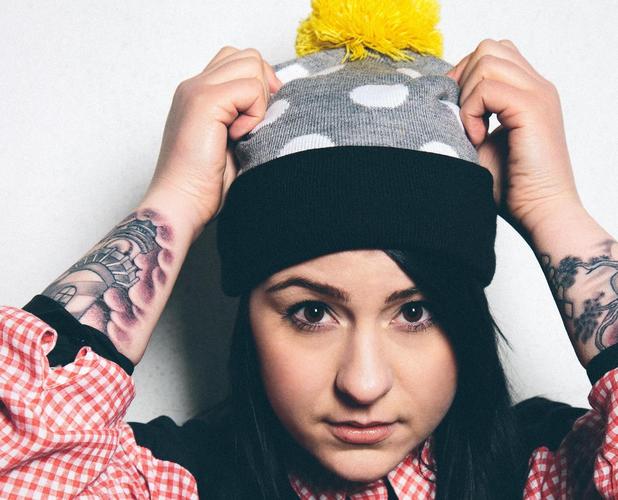 In 2012, guitar-wielding Lucy Spraggan entered the X Factor. With a talent for recalling last night’s drunken shenanigans, over 25,000,000 people have watched her audition on YouTube. Although the singer-songwriter’s stint on the show was cut short, she has been busy working on new material. We caught up with Lucy, to talk about music, Horlicks and being a stiff lesbian!

Hey Lucy! Good week? Bad Week?
Yeah it’s been a good week for me. I’ve managed to do gigs this week and get quite drunk with the band.

‘Last Night (Beer Fear)’ was re-released a few days ago and it’s already climbing up the charts! Did you ever think hangovers could prove so lucrative?
(Laughs) No!

Mine are definitely not as successful as yours!
Well actually hangover-wise, I stay in bed for so long. Like, I am pretty much paralysed by hangovers.

That’s never good. Do you ever just to think yourself, I’m gonna stay in and have a Horlicks?
I wish! I really do wish I’d have thought that.

Horlicks doesn’t have the same effect really, does it? It’s not as tasty.
Depends what you’re dropping in the Horlicks really…

The video’s really good! You’re throwing some mad shapes in there. My personal favourite, is what we would like to call the worm but we think is more of a slug. What are you like on the dance floor?
I get embarrassing really. At the begining of the night, I start off like, “oh I’m not gonna dance. I’m not gonna be a d**k tonight”. And then you know 10 minutes later, I’m on the dance floor doing the slug.

The X Factor is back and we’ve heard you may be performing on the live shows. Will we get to see the return of your Gold Digger girls?
(Laughs) Oh I wish. I don’t know, you know. Uh hopefully fingers crossed that it’s in the pipeline. Obviously, you know if I get asked to do these things then it’s great!

Quite a lot of your fellow finalists have released material… have you actually bought any of their songs? Be honest!
I bought James’ song and I bought Union J’s song.

How about Chris Maloney’s?
No… No, I didn’t buy that. I haven’t listened to it.

Us neither…I’m sure we’re not missing out.
No I don’t think we are!

You’re a songwriter; did you ever feel uncomfortable performing other people’s songs on The X Factor?
Um…only when…there was one time you had an option to pick, out of a few songs. But none of them were me really. So when I did ‘I Will Always Love You’ at Judges’ Houses that was the only one that was really a bit like, “argh, I don’t know if I can do this”. I did actually say I don’t think I can continue doing this – doing other people’s songs. At that point they were like… “well we might have to find somebody else then”. And I was like, “well you’ll have to find someone else then because I don’t want to just embarrass myself like that”. I think they picked up on that and they respected it, so I got to do my own songs.

Definitely, hold onto your integrity Lucy! Well you’ve got loads of new songs on the album, which is called “Join The Club.” It’s out October 7th. Are you nervous?
I am very, very nervous. I wrote all the songs, their all my little experiences and my life. It’s quite nerve-racking having them put out there for people to judge.

How personal are the songs? Are we going to get into the nitty gritty of Lucy Spraggan’s life?
Yeah! I mean the whole album links up. Every song links to the next one. It’s a bit like a chronologically ordered story.

Some of the songs from 2011’s ‘Top Room at the Zoo’ have found their way onto the new album. Have they been given a bit of studio magic or a makeover?
Yeah…not so much a makeover but obviously I’ve worked with different production, making everything sound that little bit more full… like something you’d like to listen to on the way home on the bus. Some of it gives you a bit of motivation. Also, I’m on tour again and I wanted all my new songs to kind of sound big…especially, with the band and stuff.

You mentioned that you’re on tour. You’re all over the UK, in October and November. Sell the Lucy Spraggan gig experience to us in three words?
Oh… I think it would be…oh my god that’s really hard. The set is designed like a living room so everyone’s chilled out.

Loud? So bring earplugs maybe. Do people need to worry about their hearing?
No, their hearing will be fine! I’m bringing my dog along on tour; I bought him some little doggy earmuffs.

Well if it’s good enough for the animals, it’s good enough for the humans! I love the new album artwork but it’s pretty clear to see you are rubbish at shuffling cards. Do you have any hidden talents that you have yet to reveal?
The reason the cards are on there…I used to be a magician. The song “Join The Club” is a song which explains life as a bit of a gamble and that you should just enjoy the game. It references cards, and the only suit of card it doesn’t mention is clubs. Therefore, it’s a play on words called “Join The Club”. Uh, yeah it all kinda ties in with the artwork.

We feel we’re constantly congratulating you…you’ve recently been announced as a nominee for Stonewall’s Entertainer of the Year. How does it feel to be recognised by such a prestigious organisation?
It’s pretty amazing. I’ve worked quite closely with Stonewall over the last year. It’s really cool to be involved with that type of thing. It’s really nice to think maybe somewhere, someone feels a little more confident about being gay, because I’m openly gay. That’s cool.

We’re sure this is the most important question you’re going to be asked all day…How much hairspray does it take to hold up a Lucy Spraggan quiff?
So much! I also use powder, you know like hair powder, hairspray and then there’s gel spray too.

Oh so there’s a combination of products?
Yeah it’s a combo. Also, you have to backcomb it…which is difficult, especially for a lesbian.

Yeah, you don’t want to be a lesbian walking round stiff!
(Laughs) Exactly!