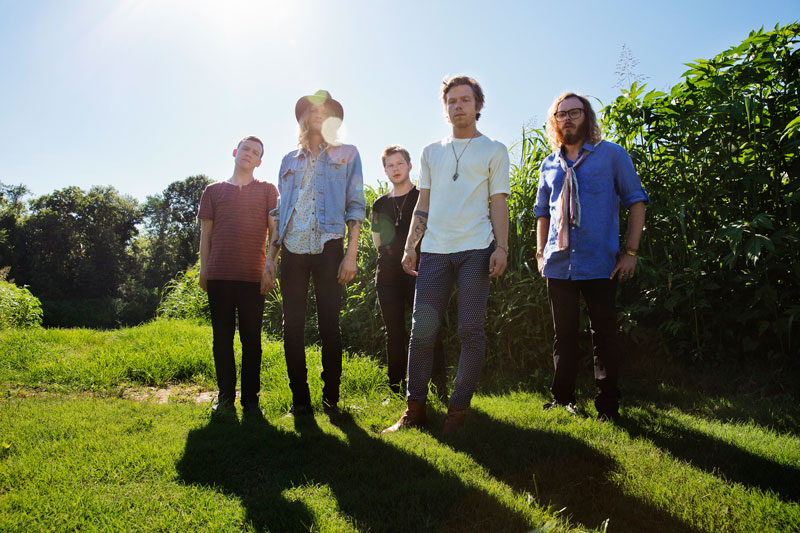 Cage The Elephant look set to continue their success with new album, ‘Melophobia.’ The album follows 2011’s ‘Thank You, Happy Birthday’ which reached No.2 on the Billboard Top 200. We caught up with lead singer Matt Shultz to talk music, guitarist Lincoln Parish’s departure and being a bad legal guardian!

‘Melophobia’ [the band’s new album] is defined as the “fear of music” – should fans be fearful or is this just reverse psychology?

Well it wasn’t so much an actual fear of music as it was a fear of creating music to project premeditated images of self, especially false premeditated images of self – like to create music to be perceived as intellectual or artistic or poetic or god forbid genius or any of those meaningless titles that have been created to separate people rather than deal with what art is actually supposed to do; it’s a way to communicate that’s beyond words or everyday conversation.

You’ve said the album tested the band – how did you go about creating music which satisfied each individual?

We’ve been touring for five years solid, so y’know we were living on top of each other. So there’s always been this general awareness of where the band was moving as far as the direction was concerned. On this record, it was the first time we’d ever spent several months apart before getting together to write. We’d written quite a bit as individuals and then we came together and all had pretty strong ideas or visions for where we wanted to see the record go. They were all polar ideas and so it was quite the task to cohesively marry those ideas and it was a struggle…y’know?

Obviously, we’re all very passionate about what we do but in the end it gave the record volumes more depth and it’s a more real record. Whilst we were making it, during certain songs, I was like, ‘gosh I’m so broke, I don’t feel like I can deliver this right’ not realising that brokenness was exactly what needed to be captured in the track. Not to ring our bell but it was all very genuine.

Oh no…you can ring your bell as much as you want! So do you feel the emotion in the album is rawer than your previous records?

Yeah, I think it’s just a more transparent record. I think as human beings we’re addicted to projecting image and for us it’s always been a fight against that. On this record, I think it’s definitely the greatest strive we’ve made away for that.

One of my friends is in a band called Morning Teleportation. Isaac Brock, from Modest Mouse, told him that if you’re not writing lyrics that make you slightly uncomfortable or embarrassed to sing you’re probably not writing good songs and that resonated with me. For the band in general, it was just about steeping outside ourselves.

For the band in general, it was about finding the courage to step outside yourself. One of the things that I did was I kept myself lost from listening to music or any musical recordings during the writing and recording process.

Do you think the process contributed towards Lincoln’s [Parish, Guitarist] departure?

Lincoln’s departure? No – Lincoln, honestly just couldn’t do it anymore. He’d been doing it since he was fifteen years old. When we first started out, moved to New York and then London. Lincoln’s parents decided that we were his legal guardians. He was fifteen years old and lived in London for two years on his own and y’know didn’t have a chance to be kid – that takes a toll on people. He just didn’t wanna tour anymore. We went on tour after we made the record and toured for about three or four months. We’d had a year off at home prior to that and that was the first time we’d had time home and he just enjoyed it so much that he didn’t want to continue to tour. There are no hard feelings.

Yeah, it sounds very amicable. Were you a responsible legal guardian or were you quite lenient?

So we should never leave our children with you?

(Laughs) Yeah…no! I’m not as hard of a partier as I was then…

The approach to this album was really experimental – are there any tracks in particular you feel will surprise fans?

I don’t know. I usually hope the entire record surprises them. Whenever you finish a record and you move past it, you come back to writing and it feels like some foreign language. However, that’s actually the best place to be as you’re relearning how to speak through what instrument you play…if it’s that foreign to you then hopefully it creates something different. It’s kinda like that whole thing of immediate and complete abandonment and rejection of what you’ve done prior to that. As soon as you finish it you just push it out from yourself – it’s like in the movie ‘Adaptation’ there’s a character and he’s like ‘I was all about fish, I had hundreds of fish tanks and one day I was like f%@k fish! I’m never gonna fish again.’ I just like that motto ‘I’m done with fish, I’m a free guy!’

Alison Mosshart [lead singer of The Kills] features on ‘It’s Just Forever’ – what made her the perfect fit for the record?

The idea kinda came from the Screamin’ Jay Hawkins song ‘I Put A Spell On You.’ Instead of having just one person in a relationship who’s obsessed with the other, I thought it would be interesting if both people were grossly obsessed with each other. Once we wrote it, we really wanted it to be a duet and Alison Mosshart was on the top of our shortlist. We spoke to her and she kindly responded and she came to the studio and totally just destroyed it – she was amazing!

She’s quite good looking too – guess that makes it easier to sing with her?

(Laughs) It didn’t make it difficult…

Lead single ‘Come A Little Closer’ enjoyed weeks as No.1 on the US Alternative chart. What track do you want as the next single?

Um…we’re hoping to release ‘Take It or Leave It’ as the next single.

You’re hitting the UK in February, as the special guests on Foals’ sold-out UK tour. Are they good tour buddies?

Yeah! Foals were one of the first bands we befriended when we moved to the UK. Shamefully so, the dark years when Lincoln was fifteen, we trashed many a dressing room together and had video footage of it which was really funny.

They’re just great guys and they make great records, so it’s nice after all these years to be touring with each other again.

You’ve got your own headline show at the Electric Ballroom February 17th. Do you find performing more enjoyable as the headliner or support act?

I love both of those positions. Obviously, nobody hates the idea of having a crowd that’s solely there for you and knows the material. I also love the challenge of winning over a crowd who isn’t familiar with the record. Y’know you play those first couple songs and the audience isn’t quite sure whether or not they’re gonna like the experience…by the end of the set everyone is laying on the floor.

Is that a good thing or bad thing? Is it because of exhaustion or have they fallen asleep?

‘Melophobia’ is released February 10. Cage The Elephant’s tour dates can be found below.