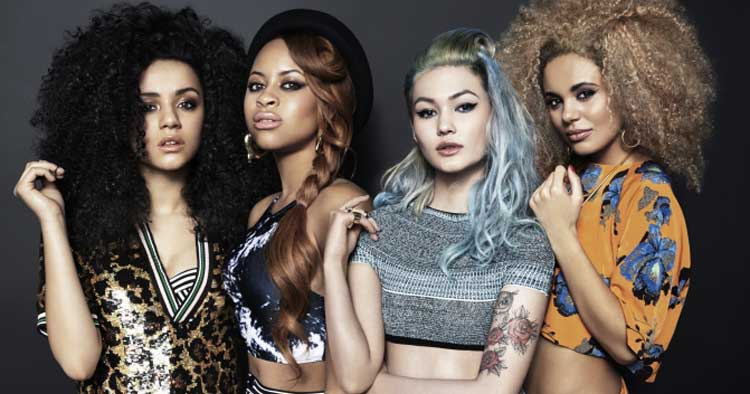 Neon Jungle is not your typical girl band – they don’t wear matching outfits, perform dance routines or hide behind a wholesome façade. Instead, they combine the swagger of Rap whilst maintaining the deliciously infectious Pop sensibilities of their female counterparts. We caught up with Jess [Plummer] to discuss the band’s debut album, her obsession with Drake and daggering!

‘Louder’ [Neon Jungle’s new single] is out July 20th. The track marks a departure from your usual sound – was that a conscious decision? No, not at all! D’ya know what? Honestly, it was just the fourth song we learnt. ‘Trouble’ was the first song we learnt; ‘Welcome To The Jungle’ was second, but we wanted to release ‘Braveheart’ second. Then, we recorded ‘Louder’.

Oh, so you were lucky then… Yeah – basically, it just happened in a very good order.

What’s the response to the single been like? The reaction has been good! The song isn’t out yet, so people have only heard a snippet on YouTube, but so far everybody’s been like ‘wow – we love it, it’s different, we can’t wait!’

Last week, you performed the track on Britain’s Got More Talent. Have you ever considered applying for similar shows? No way! No! Maybe for like a millisecond, whilst watching it on TV. Then, I come back to reality because I don’t know how they do it. I commend those people that go up there and perform on those shows. I wouldn’t do too well; I’d be too nervous.

Really? We definitely think you’d get to the finals… Ah you’re really sweet! (Laughs) I wouldn’t even get to the audition, I’d be too nervous.

Well, you’re no stranger to the audition process [each member auditioned for a place in the band]. Was it difficult merging your individual artistry and tastes? We are quite different, but I think that’s what makes it so easy. We’re all different, so there isn’t a clash. Literally, from the second we knew that we were the band; the girls came back to mine and stayed over (laughs). It was like four perfect parts to a four-part puzzle. It was so easy, and wasn’t awkward at all.

In recent years, the UK has produced a number of successful female solo artists – like Katy B, Jessie Ware and Rita Ora. However, it seems more difficult for girl-bands to make their mark. Why do you think that is? Umm…I’m not sure. Being in a girl band myself, it’s hard to say why that is or compare it to anything else.

Have there been any difficulties you’ve had to overcome as a band then? The one difficulty, actually it wasn’t a difficulty – I quite like the fact that we build everything organically. We’ve had no platforms like a TV show or anything like that. It was a difficulty at first, but ‘Trouble’ somehow managed to chart when we only had around 5,000 followers on Twitter. That was insane, but I like that we kind of started from the bottom.

Unlike similar groups, you guys don’t perform strict dance routines. What’s so offensive about choreographed dance, because we love the ‘Macarena’ and ‘Saturday Night?’ I love the Macarena too, but we’re not very good at dancing as a collective. If you’re not going to do it strongly, then there’s no point in doing it because it looks annoying. We’ll leave that to the acts that can get away with it.

We were discussing this in our office, and ours would be daggering [which according to Wikipedia “incorporates dry sex, wrestling and other forms of frantic movements”] (Laughs) Daggering! Oh my God!

It may be a bit intense for Neon Jungle… (Laughs) No! That is funny – you should come along and teach us.

Your debut album ‘Welcome To The Jungle’ is released July 28th. What can fans expect from the record? Umm, I don’t know. I feel everything we’ve released has been a bit of a shock, but I think it’s fair to say that it’s going to be pretty diverse and it will reflect the different sides of us as a group.

The album’s titular track was meant to feature a guest Rapper, but you were so good you got the part. Who would you have liked on the song? I really have a slight obsession with Drake, so probably him. At the same time, someone like A$AP Rocky would have really suited it. To get a feature with Jay-Z would be crazy because what girlband has he collaborated with? Any Rappers would have been cool.

Jay-Z’s probably dealing with some difficulties in a lift somewhere… (Laughs) Oh no!

What’s your personal highlight from the album? Just making it – being in the studio, that kind of thing. We literally found out we were chosen on the Monday and on that Thursday we were in the studio together recording our first song. So, from the very beginning until now, we’ve been listening to different tracks, figuring out what will go on the album and what won’t, making it and finally letting the world hear it.

Finally, when can we expect a full-blown Neon Jungle tour? Good question – I swear I find out most of my information from Twitter, so I know nothing before anyone else. Soon; one is definitely in the pipeline.

But it’s best not to come to you for the information, we should just check Twitter? Yeah – just look on Twitter man.