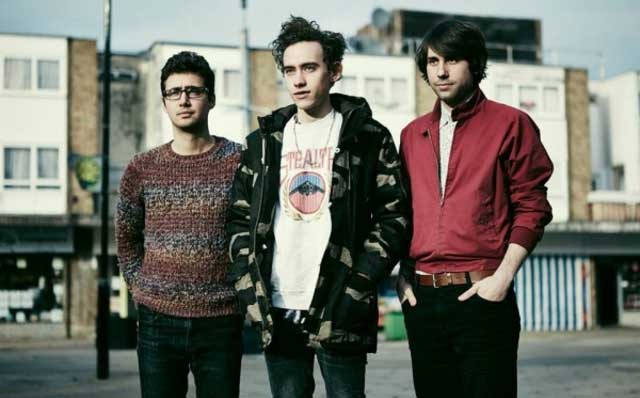 London based dance trio Years & Years consists of Olly Alexander (you’ll more than likely recognise him from Skins) Mikey Goldsworthy and Emre Turkmen. Two met online, whilst the other joined after being overheard singing in the shower. We had a chat with Emre to find out more about these unusual beginnings, their new single ‘Desire’ and Sex On Toast.

Hiya, how are you?

So, what are you all up to at the moment?
Right this moment, I am sat on a couch in a department store at the Metrocentre in Newcastle and I’ve just had some breakfast.

What a place for an interview!
Haha, yes it is quite surreal.

How did Years & Years all meet?
About four years ago I was looking to join a band, Mikey had just arrived in London from Australia and he put an ad online, on a musician’s website, looking for a guitarist. So, I met up with him in a pub in Notting Hill and then we started talking about Radiohead for five hours, got drunk and started a band together. Soon after that Olly met Mikey at a house party and he asked Mikey if he could join our band and that was it!

We’ve all heard the story of how Mikey overheard Olly singing in the shower and then the band was complete. Is this true?
That is true! Mikey was at this house party and he stayed the night there. In the morning Mikey did hear Olly singing in the shower. Now, Olly says he was doing it on purpose so that Mikey would hear him because I think Mikey was reluctant to let him join the band, but once he heard Olly sing he was a bit more into the idea.

Haha, and what is your favourite song to sing in the shower?
Oh, I would have to say “Singing In The Rain” haha.

That is very fitting! You have described your sound as a mixture of genres; did you all have a plan when you first started the band about what musical direction you wanted to go in?
We wouldn’t really have described ourselves as anything because we can’t describe it. We never really thought about it in any real, conscious manner. When we first started I used to play guitar and we were quite an acoustic, almost a folk/indie kind of band. Then over time, I started getting really interested in electronics and Mikey started playing bass synthesizers and it happened quite gradually. I think it takes a while to find your sound, we didn’t design it, but once we started playing it we didn’t look back.

Now that you are into using electronics and laptops you are often compared to other dancey/electronic acts like Disclosure. How do you feel about these comparisons?
We think it’s cool, sometimes when people compare us to bands we think that doesn’t make any sense. We’ve tried to make more pop music, but quite dancey pop music. When we start playing longer shows we want to stretch the songs out so that people can dance as much as possible. So, yeah it’s cool we feel good about those comparisons.

Being a trio how easy or difficult is it to take into consideration everyone’s different influences?
Well, we used to have more people in the band, which can be quite difficult because everyone has their own ideas. Now with the three of us, this is partly the reason why there is just the three of us, things just work. We don’t have to plan it or make it work, it just tends to work. It feels like the strengths of each of us compliment the other. I was reading an interview the other day with Ray Davies from The Kinks and he said the best bands are the ones that don’t have the best musicians, but the ones that have people that just work best together. We all bring very different things to the table and all the best stuff happens very quickly without much effort. I’m not trying to sound arrogant, you could work on a song for days and days and it won’t be as good as a song that happened within half an hour and you don’t really know why.

When you are writing a new track are there any routines you have?
There are a few routines and a few ways we write music. Olly’s always writing songs on a piano at home somewhere or in the studio and I’m always making lots of weird beats and synthy stuff. Often Olly will send me something, he might have recorded a snippet of a verse or chorus on his phone and then he’ll text it to me. I’ll go through my laptop and think ‘Oh, this goes with that’ and I’ll put bits together and send it back. Then we’ll get into the studio with Mikey and he’ll say what bits he does or doesn’t like, so that’s one way we work. Another is I might play something I’ve been working on in the studio then Olly will perk up and start singing over the top, so it does happen in a few different ways.

Your video for “Real” featured a few famous faces; some may recognise Ben Whishaw from the James Bond film, Skyfall. How did that come about?
Well, Olly used to be an actor and he was in a play with Ben called ‘Peter and Alice’. So, we knew Ben a bit, he had come to our early gigs too and we had this idea for a video. At that time Ben was in a West End play and had this scene where he was dancing and it was quite weird and wonderful and we thought it was cool and it was going to fit in with what we wanted to do in the video.

You covered “Breathe” by Blu Cantrell and we have to say we absolutely love it. Being an RnB track were you out of your comfort zone or have you always been into RnB?
No, I wasn’t out of my comfort zone at all. I love 90’s RnB,  I wouldn’t say we are an RnB band but we draw influences from quite a few things, certainly with the way Olly sings it fits in with that vibe. We love that track, it was a cool track to do because it’s an amazing song but not one everyone knows as well as one of the bigger hits.

Obviously you are now called Years & Years, what other names did you consider for the band?
Haha, actually me and Mikey were in a room and we were trying to think of ideas of what to call ourselves, we were about to have our first gig ever and we didn’t have a name. Years & Years was the only name that we didn’t both hate. I can’t really remember the other names they were just too terrible, at one point I think it was going to be ‘The Waves’ or something. Mikey used to be in some weird bands that had weird names; he used to be in a band called ‘Sex On Toast’ they’re still going by the way, you should check them out haha. To be honest, a lot of the time you can have a really awful name but it will still work if the band is good.

Yes, it is really down to the music in the end!
Yeah, definitely.

We heard Mikey danced with Gwyneth Paltrow, is it true?
Haha, yes that is true! He used to work in a restaurant that was quite posh, I think it was maybe a Christmas thing and Mikey just went up to her and had a little boogie. He got free tickets to a Coldplay show on the back of it though.

Are there any other ‘claim to fames’ you can tell us about?
At one of our gigs for our very first single, Aaron Paul (who plays Jesse in Breaking Bad) turned up pretty drunk and he kept shouting my name from the audience. I think he was next to my friends who egged him on and he was like “I love you Emre” so that was pretty funny.

You’re currently supporting Clean Bandit on their tour. What is one of your favourite songs to play live?
I really like playing “Real” live actually. I play the bass on that and it’s always fun, it gets the crowd going.

What else can we look forward to from Years & Years?
Well, you can look forward to our new single out in November.  It’s on Soundcloud at the moment, it’s called ‘Desire’. We’re also working on our debut album, so hopefully early next year we’ll be releasing that. Then we’ll be doing more live shows!

Sounds good! Thanks for chatting with us Emre.
No problem!