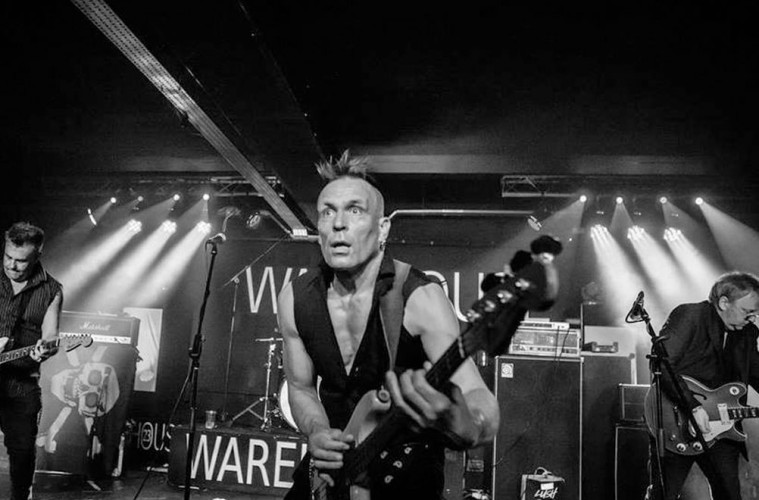 It’s been 26 years since The Membranes released their last album To Slay the Rock Pig, but the wait is over and hungry fans can now stick their teeth into The Membranes seventh album Dark Matter/Dark Energy. I managed to catch up with The Membranes bassist John Robb in a room with walls plastered with posters above The Hope and Ruin in Brighton where his band would play later that evening. Here he tells me about life, the industry and the new album.

Since you have experience in both performing and journalism, which do you prefer?

Performing live is the best; it’s more exciting and more in the moment. I mean I like writing and people can write good stuff, you can get a little flow and the words start coming, it’s a good feeling, but being on stage you get a rush and people start getting into the music and in the moment like pop culture should be.

With this knowledge do you think it effects how you come across in interviews?

I don’t think it does. I guess if you interview a band and you are in a band then they seem to trust you more. Journalism has seems to have changed, because in the 70s journalists would want to annoy the band to get an answer, almost like having an argument with them, where as now people try to get empathy out to get an answer.

Do you think that the world of music has changed since you started?

I think it has. In the 80s most people didn’t understand what we were playing at all, because the music was too loud and was just noise to some people, whereas now peoples ears are more tuned to it now, we are also better at doing it now so that makes a difference. We used to have ideas back then, but we couldn’t play them and you couldn’t copy other bands because no one else was doing it so you had to make your own sound, and try to be as honest to what came out of your hands as possible. Now days you can go to college and learn how to do it, but back then we didn’t have that you had to just guess, and you couldn’t ask the older bands because they hated you because you were in a punk band and they hated that. Punk causes a seismic shift and in my head I think of it as kind of before punk and after punk so everything before isn’t the same as after punk.

Do you think there is still an interest for punk in the industry now?

I think what they define as punk now is very different and they should have a different name for it. There are a lot of American bands who say that they are pop punk and I really think they should drop the punk bit out the name they are not bad bands, it is just kind of a miss description of them. They have the vocals and a tune which is made with the gadgets with the backing vocals added in, it’s really not punk in that sense it’s more pop rock. I think a group of people getting on stage and not being able to play perfectly is more punk because is more genuine. I have no problem with bands getting big because it’s hard work and if a band makes it then ill cheer them on because it takes an insane amount of work.

What’s been the most out of control show you have ever played?

There have been gigs when things have gone wrong and gigs when things have gone right, sometimes you play a gig and everyone goes crazy in the room and the pretty out of control and exciting. That’s the weird thing with rock and roll because everything is out of control in an organized way where people are shouting and don’t care what they look like, which is good because they get in touch with their animalistic side but it’s in perimeters with everyone looking after each other which is good. It’s the one good things about the music community that everyone looks after each other whereas the world at the moment is very me, me, me where music is more of a shared space.

Do you prefer smaller intimate shows or bigger ones?

I like them both for different reasons. I like smaller ones because it more intimate and hot and sweaty, and we are not big enough to play bigger ones, we could play a thousand capacity hall but there would still be a hundred people in there so it will look a bit sparse. But I like playing big gig because you get a big PA and it sounds really good, in a small room it never sounds as good because the sound we have got is intense and we want it to sound good not like thrashing noise all the bits that are there are the for a reason an you can hear that with a big PA and you have more space to move about on stage. I think a 1000 capacity is just right because it’s small enough to make the show still intimate but it’s big enough to make the show still really good.

Do you prefer hometown shows?

On one level its great but on another level everything is guaranteed to go wrong. I don’t think playing in your hometown is any different than playing in Los Angles, you just play them because each gig is important and has different crowd. I don’t want to be the big fish in my hometown and most people don’t know me for being in a band anyway, they know me for being on telly because you are on for thirty seconds and that what they think you do. I think it’s funny.

When you first started out the first bass what you had was made with a slab of wood and spare parts did it sound any good?

It sounded amazing. I got this piece of wood and caved it into a violin shape because I liked the shape of them and then wired it but I don’t know how I did it because I had no clue what I was doing, but yeah I plugged it in and it sounded amazing. For years people were trying to buy it from me until it got nicked.

So do you recommend people to not worry about the price of the instrument?

You can buy a twenty quid bass and will sound amazing. Half the sound comes out of your hands and it all depends on who’s playing it as to what sound will come out of it, everyone is completely different so how I would play it would be different to you but both would still sound amazing. That’s why music is such a good art form because even if you didn’t know any cords you can still make something good.

You guys reformed in 2010, My Bloody Valentine also requested it. How did that come about?

We have known them for years, when they started they used to stay round our house, then they became really popular. They just picked bands they liked and bands they had known for a long time. We were asked if we wanted to play again which we had never thought about but we played really well and went from there to deciding to record some new songs, then got into the idea of doing a record about the universe and stuff and thought this was a pretty cool idea.

To launch your new album you played at the top of Blackpool Tower, what made you decide to do that?

Well I’m from Blackpool, and I love Blackpool Tower, it’s got a bit at the top where you can fit about two hundred people in and this guy who runs HMV in Blackpool said I reckon I could get that for you, so I said go on then and we did it. The only problem was the people who ran the tower cocked it up and said it held three hundred and fifty, so everyone bought all the tickets. So I went up there to have a look at where I was going to place the amps and PAs and I thought this doesn’t look like it holds that many, and they go no its three stories with only one lift to get up there so if someone got claustrophobic I would need to make sure they could get out quick. So we decided to split the crowed in two and put another show on, but gig was amazing because it was a summer night and the sun was going down so they put all the illumination lights on what were purple which made the whole place glow purple. The weird thing was it was cheaper to go up the tower for our show than to go up there just regularly.

What did you want to achieve with this record?

I wanted to make one record what I liked and I wanted to play. Every record you ever make is a total disappointment, you think I wish I had done that or turned that up or down, but with this one I thought F**king hell this is really good, then when I played it to other people they said that really good, so it just kind of rolled on from there. If you are going to have a successful comeback you don’t make a record about the universe, do you really? (Laughs).

So did the fans react quite positively to the album?

If you could do collaboration with anyone who would it be?

Ill collaborate with anybody, like last night a kid came up to me and said I’ve learnt all the bass lines to your songs can I come on stage and play it you so I let him come onstage and play a song. The collaboration I really liked doing was six weeks ago in Estonia we did collaboration with a 20-piece choir and they sounded really fab. I went out there a week before and we sat in the studio and I said I want it to go like this so I played it (imamates playing it) then I want them to go like this (hums a bit) then she just played it to the choir and they just started singing it and it all just fitted into place. I like doing stuff like that and things that you wouldn’t expect. We want to bring them over for when we play in Manchester and in Portugal we might be doing it with a hundred-piece choir, which will be mental. We do what we like and if people don’t like it don’t matter.

Because of your album you’re going to have a dark cartoon made about you, did you ever expect that to happen?

This guy in London has always been a fan of ours and we have known him for years. When we played the gig in London I saw him and asked him what he was doing these days to which he told me to go visit him in Soho, but yeah he makes cartoon for adverts and wanted to work on a cartoon because he really liked the artwork on our covers so he wanted to animate those. I might make it part of another film what I am trying to get funded about the universe and about how there is multiple ones co exiting.

For more about The Membranes got to http://louderthanwar.com