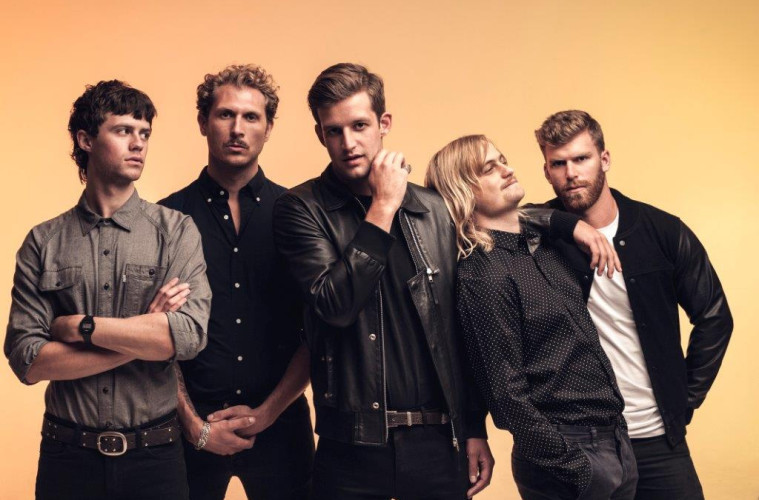 We spoke with Sam Margin, vocalist of Australian band The Rubens following the release of their new album ‘Hoops‘.

How did you all meet?

Well 3 of us are brothers, so we met at home, the drummer is a friend of mine from high school and he got on board after we’d written some songs and the bass player came on holiday with us when we were making our first record just to hang out with us and we actually needed a bass player and he played bass so he made the record with us and stayed with us.

So what made you want to start singing and playing music?

I chose music as a subject at the end of high school and I thought ‘well i need to choose an instrument then because I can’t do the subject without being able to perform’ so I started playing guitar and piano, I think I started guitar first, then I learnt piano and singing came after that because I learnt some songs and just kind of did it in my bed room for a bit of fun it wasn’t anything more than that and I never thought it’d be a profession.

The music video for ‘Cut Me Loose’ came out recently and it was honestly the weirdest thing I’ve ever watched, what on earth were the thoughts behind it?

Basically we have made so many music videos and we are always in them and this is the 5th single on the radio. We like the director and we know that he’s just a funny and strange man, we basically just gave them a budget and basically just said ‘just do your worst’ and we weren’t involved in it, we were on tour at the time, we were just seeing these edits come through and we were like ‘holy sh*t this is awesome’. Its probably one of our favourite videos just because it’s so insane and it’s just confusing.

It was the big baby that really confused me.

The baby is just, yeah… The rest of it kind of makes sense, a struggling director behind the scenes trying to make a music video but then the baby is just like the other side to it which is just completely insane.

I just didn’t expect it to come back at the end, I was just like ‘oh my god’.

Your new album ‘Hoops’ was released in the UK on the 20th May, what kind of reaction have you had so far?

I think it’s been pretty good, I mean I haven’t really been checking charts or anything but I think the charts have been alright for an unknown band. The reactions from crowds have been really great too. We’re actually just loading in to our London headline show tonight which I’m sure will give us a good idea on how it’s going but it sold out really quickly so I think it’s going to be really good.

How would you say English crowds compare to other crowds?

I’d say that British crowds remind me of Australian crowds, I think where as Americans are I guess much more enthusiastic immediately, I think British crowds want to be impressed in a way that you need to prove to them that you can play. It’s really similar to Australia.

It’s strong, right now we’ve got some really big acts coming out of Australia and the live music scene is really thriving and you know, Australian bands are selling out huge venues and arenas and stuff. There’s a radio station called Triple J which an international station which supports Australian music and of course international acts as well. They give up and coming artists a chance. A lot of international UK and American bands that we know they come over to Australia and they love it because they reach all of Australia by playing one show or by being on the radio station.

You’re playing quite a few festivals this year, how would you say festival crowds differ to your own crowds?

Festival crowds are fun, like if you play a big festival and you’ve got a huge crowd, I don’t think you can relive it because the crowds are just that big unless you’re playing some huge arena you’re never going to have that many people watching you so the energy is amazing. I guess we’d play our set differently for a festival because obviously they’re not all there to see you. So I guess when you’re playing a headline show, you can play the B sides or the really old songs and people appreciate them where as festivals they’re pretty much there to hear the songs they’ve heard on the radio.

What is your career highlight so far?

We won this thing in a show called ‘The Hottest 100’ which is I think the world’s biggest music poll. Like 3 million votes per year or something. I think it’s the biggest achievement you can get in Australia, so yeah it was the craziest thing that has happened to us. We’ve done other cool stuff like we supported Springsteen on tour which was amazing just because he’s an icon and to be able to say you did that is really cool.

What have you got planned for the rest of the year?

We are finishing up here in a few days, we’ve got Dot To Dot Festival over the weekend here and then we head back to Australia where we are doing the biggest venues and biggest tour we’ve ever done. Then we are just trying to make our plans now for later in the year to come back and be playing Europe again around September, October.

I wish you luck, thank you.

Thank you, it was lovely chatting, bye!