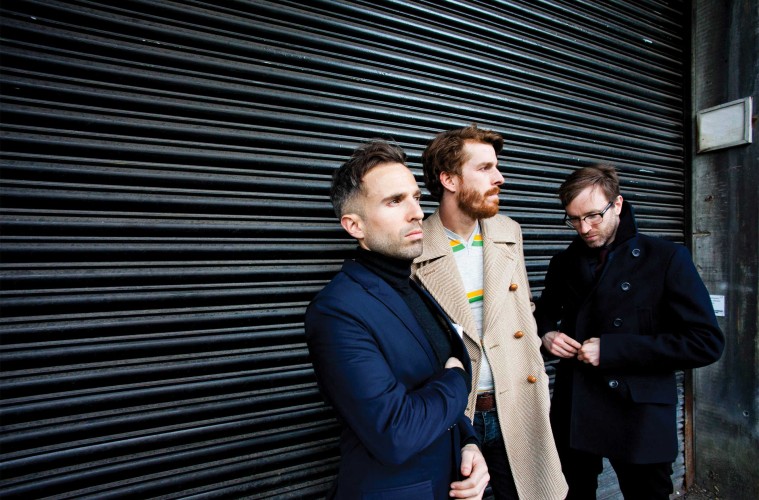 Here at The SPG we love an exclusive and that’s exactly what we got when The Hoosiers stopped by en route to the first gig of their UK tour, to perform three of their tracks on our sofa! Soon after their extremely intimate gig, we caught up with the cheeky trio to discuss their new album, going on tour and their horrendous snoring habits…

You finished your UK tour back in November, how did you guys feel about going on tour again? Irwin: A mixture of nerves and excitement. Nerves because I didn’t know how all the songs went at the start because the album was so fresh!

Did you practise on the tour bus? Irwin: Yeah that was probably about 90% of the practise!

Any random rituals that you do before you go on stage? Alan: It’s not that random but we always have a big group hug.

Aw… how lovely! Alan: It’s not lovely, it’s quite filthy. Sam: Our lives have been transformed by the S and C game recently. I think you can call that a ritual and we do that now every time. I don’t think we should tell you the rules though; maybe we should just keep it to ourselves. Irwin: No they’re students, they’ll dig it, let’s pass it on, it’s a really useful game. It means sometimes we stay up after gigs (it’s like crazy heavy rock and roll stories – up until the early hours). I think 5am is our record so far. It’s word association but you’re not allowed to say any word beginning with S or C… we really do know how to live it up. Sam: It sounds simple, believe me. Irwin: Sam would be out for a start with that amount of s’. Alan: ‘Sounds really simple’ that’s two s’… drink!

Obviously you guys spend a lot of time together anyway, let alone on tour! Does anyone have any annoying habits that we need to know about? Irwin: None… next question!

I’m guessing you do Irwin… any snorers?! Alan: Oh yeah, true… the snoring thing. Irwin does an appraisal of everyone he partners with. You’ll come down in the morning and wait for Irwin to come in and go, ‘’Yeah, 6/10 for your sleeping last night.’’ Irwin: I am a very demanding co-sleeper.

So what would you rate Sam and Alan out of 10? Sam: These days… I’m a changed man, come on! I’ve come along way. Irwin: Can we talk about the old you? Sam: Yeah, it’s much more fun. Irwin: Fat fun Sam – he was a snorer, now, it’s boring Sam. Sam: Silent as a mouse!

You don’t snore anymore?! Sam: No, nor do I smile! Irwin: He’s miserable as sin but it’s a trade off. Sam: Smug though, really smug… smiling inside. Irwin: We’ve broken you.

The Secret Service is your fourth studio album to be released. How long had you guys been working on the album? Sam: Less than a year I’d say. Irwin: There’s a couple of songs that made it on to the album that had been around for years and there’s some that were written recently. Alan: We wanted to make this album quicker. We’ve dragged our heels between albums. There’s been an average of an album every 3 years almost. We wanted to be a bit more prolific, so intentionally sped the process up.

How do you guys go about writing the songs? Is there a certain process you go by? Sam: Every song is different. The one that we wrote like five years ago (Dancers In The Dark) I can’t even remember how we wrote it. We’ve been trying to crowbar that one into an album. It was almost going to go into the second album, so that goes back such a long time that I can barely remember. Other ones we’ve written much more recently and much quicker. Alan: But yeah, it can be Irwin on his own and then sometimes we’ll share lyrics, or bring an idea, or a verse. As we get older and wiser it is worth mixing it up and changing tack, otherwise we’ll write the same song over and over again.

You have 11 tracks on the album, if you had to pick one, which one would you choose? Sam: It’s so boring to say I like them all the same, but I do. Irwin: Oh that is boring! Booooo! Sam: Because they’re all so fresh. It used to be the most recent one I’d like the most. They’re all so new that every song I listen to I go, ‘Oh I like this one!’ So It’s hard to say, but the one I wrote, yeah, definitely that one… Alan: I’m going to name one! The Most Peculiar Day of Your Life – that’s good, it gets me going.

As well as releasing an album, you’ve also released two new EP’s called ‘The Wheels Fell Off’ and ‘Up To No Good’, both of which feature five tracks. What can you tell us about the EP’s? Alan: Before we started this process we were gonna just release EP’s, but then we went to the fans and said, ‘What do you want? Would you prefer, EP’s or an album?’ They voted very heavily in favour of an album, so we decided to do a series of EP’s and then combine them into one big album. Sam: Keep everyone happy… we do our EP’s, they get their album.

As well as an album and two new EP’s, you’ve also released a limited edition live album. The songs were recorded from your Tour From Nowhere, which you did in London in 2014. Did you always plan to do a live album? Irwin: We’d talked about it for a while. It’s nice to have a marker to stick a flag in the sand and go, ‘that happened.’ We’re very forgetful and we forget how the songs go for a start. It was a really good gig and we were recording throughout that tour, it made a lot of sense. We partly did it as well as a thank you to everyone as we were giving it away with pre-orders of the album.

We’re sure your fans appreciated it! Thanks for chatting to us today guys, it’s been great to catch up and we must say… we love the new album!