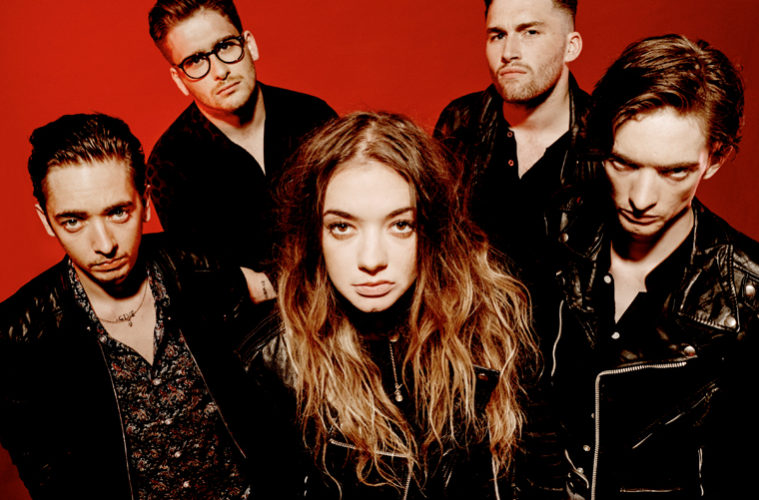 Marmozets are an English rock band hailing from Bingley, West Yorkshire. Marmozets were signed to Roadrunner Records in October 2013 and released their first debut album in 2014. Their second album, Knowing What You Know Now, will be released in January 2018. We caught up with one part of the band, Jack Bottomley.

Q 1: Hey, thanks for chatting with us! How’s it going in the world of Marmozets at the moment?

Everything is great. We’re back out on the road doing what we love. It’s great to be back!

Q 2: What have you guys been up to in the past three months?

We’ve done a couple of small UK tours as well as a couple of music videos in the gaps between. It’s nice to be back out of hiding.

Q 3: Can you tell us how you would describe yourself as a band and the music you make?

We’re a very close, tight knit group. My brother plays bass and the other 3 are siblings too. We vibe off each other creatively and have something you can’t break. I think that reflects into what we write. Everything comes from our hearts. We’re very passionate about it.

Q 4: You guys recently revealed that you’ve finished work on your anticipated second album ‘Knowing What You Know Now’ – how long have you been working on the album for?

We wrote probably about 40 or 50+ songs since Reading Festival 2015. It wasn’t until maybe about 9 months before recording that we actually got a set of great songs, that we all loved, together. It was a battle but we wanted it to be right – we feel we achieved that.

Q 5: What shall we expect from the new album?

A load of new bangers. It’s more straight to the point. It’s dynamically stronger, vocally and lyrically stronger. We feel it’s a big step up from previous releases and it’s something we’re super proud of.

Q 6: Taking it back to the beginning, when was your first proper breakthrough into the music industry as a band?

I think it was maybe when we played the 100 club in London. That felt like a pivotal moment for us. We’d had press and all that before then and toured loads, but that show for us was a stand out. Our photographer friend, Tom Barnes, came down and we got the artwork for the Weird and Wonderful record all shot around the venue before the show.

Q 7: Out of your whole career, is there one show in particular that really stands out to you?

I think a highlight was playing the main stage at Leeds and Reading. We’d played on various stages at that festival over the years then to get to the main stage and be given that opportunity and a UK festival for us is and was massive.

Q 8: You’re currently on tour and I bet it’s great to visit so many different places! What’s the biggest highlight about travelling around for shows?

With the UK and having not toured it in a couple of years, we kind of get a sense of nostalgia, going back to venues we haven’t played at in years. The crowds have really varied in age since we were last out and it’s great to see a load of new faces.

Q 9: You guys spend a lot of time together, especially on tour – do you ever annoy each other?

No, we all get on like a house on fire and constantly have a laugh. We’re lucky to have that!

Q 10: Apart from the release of your album in January, what else have you got planned for next year?

A hell of a lot of touring, we’re going to continue to write music and make a difference to whoever we can.