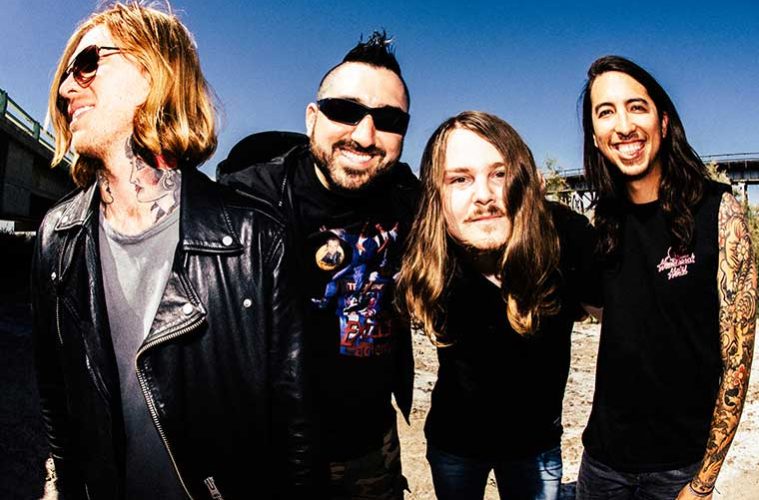 Over the course of 5 years Of Mice and Men have achieved impressive success for a modern day heavy rock band, such as hitting No. 1 on Billboard’s Rock/Independent Charts and performing with the likes of Metallica, Queens of the Stone Age and Linkin Park. They share an intense bond with their loyal fan base due to their extremely meaningful and honest lyrics. We caught up with the band to discuss these deep meanings behind their most recent music and their journey to success…

Q1. Thanks for chatting with us! How are things in the world of Of Mice & Men at the moment?

Q2.What’s been your best show on the tour so far?

We just played the Velodrome – I’d never been in a building like that, so it was really cool to see. There’s so much culture out here with venues and buildings in general, so to be able to be out here and experience that, fill the rooms with music and for people to love it is a really cool experience. I think every night really has something cool to offer. We’re really fortunate to be put in front of such a large audience which is predominantly ‘5 finger death punch’ and ‘flames’ fans; we haven’t had any complaints, so it’s a pretty amazing experience.

Q3. How would you describe your music to someone who isn’t familiar with you?

We’re an aggressive hard-rock metal band from Sothern California, and we write about our personal experiences. Over the years our fan base has really resounded with that honesty and the level of understanding which we have of music. We’ve been able to travel all over the world to showcase these songs and this music, which might be somewhat of a counterculture to your normal mainstream music. This is a world which is honest and heavy in parts, but at the same time very hopeful. We have a lot of different music, but predominantly what ‘Of Mice and Men’ focuses on is heavy, melodic, very metal and is kind of an ‘in your face’ type of music. We’ve got over 60 songs, so there’s one in there for everyone.

Q4. How much does your latest album ‘Defy’ differ from your debut album ‘Of Mice & Men’?

With this album, we really tried to take a look back at every album which ‘Of Mice and Men’ has ever created from the very first one. To take that ethos of how we had no idea of what we were doing, and how we were just coming up with cool parts. When you’re young and writing your first essay, it’s definitely not going to be as good as one you write almost ten years later. With this new album, not only did we look retrospectively, but we wanted to look prospectively too towards how we could create or better formulate the sounds of ‘Of Mice and Men’, and we really tried to put that into this new album. I think we succeeded; we went through a lot of different sonic landscapes, tried different obstacles, different riffs, different renditions of the same song, and I feel like through that process of us being able to look retrospectively and prospectively really helped us find the sound which I feel is the quintessential ‘Of Mice and Men’. I feel like we were really able to achieve that with the help of Howard Benson, who produced the record. He came in not so much as a producer trying to tell us what to do, but as one who helped bring out those ideas from the past. He didn’t know the band back then, but he really was excited by what we were creating; as we were working on it together, we were all feeling very excited with how much like ‘Of Mice and Men’ it actually sounds.

Q5. Does the name ‘Defy’ represent that as well?

Of course – it’s kind of like defy the odds; we wanted to let people know that you have to really do yourself and you have to be powerful within yourself in order to achieve, moving past those challenges.

Q6. What led to you pick ‘Warzone’ as the lead single for the album?

Over time we feel like ‘Of Mice and Men’ has created a lot of different music sonically, and something which we really wanted to show on this new record is that there’s a huge amount of aggression and excitement in the music. Not only is ‘Warzone’ a track which really accentuates that, but we also wanted to make a statement and be like “check it out: this is Of Mice and Men. This is the heaviness”. We’re really excited about this song; we timed it perfectly with going on a tour with two of the biggest names in metal music in the world right now. I think it was a perfect time for us to unleash a song like that, because it was right at the start of the tour and we’d been playing the song every night. We wanted to drop the album when we dropped ‘Warzone’, so we were just like “Ah, let’s put it out right now!”

It must tease your fans as well.

Of course, and that’s always exciting too. We love having the ability to put out music which resounds with our fan base and knowing that we’re all speaking the same language. That’s music, that’s ‘Of Mice Of Men’. For us it’s just amazing to put out any music in that aspect; to be able to have a song which can get people really pumped up, show some of Aaron’s screaming capabilities, and demonstrate where the band’s at and how our sound is today.

That’s actually one of my favourite parts on this record; the way that him and Howard Benson were able to work together to create some of the most impressive vocals I think I’ve ever heard. It’s really awesome to know that musically we have been able to push ourselves to an absolute new level while still maintaining the quintessential sound of ‘Of Mice and Men’. 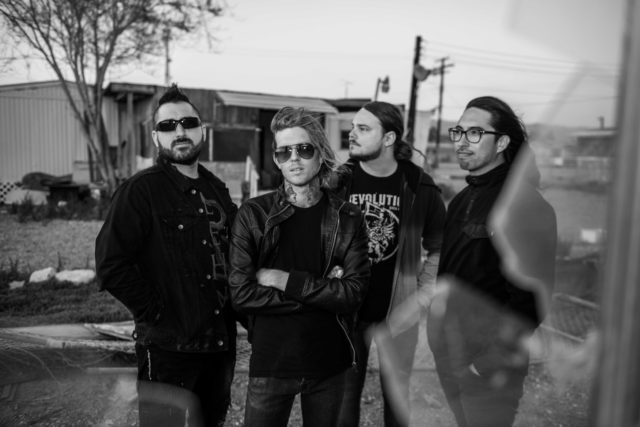 Q7. Why did you decide to put your documentary ‘Unbreakable’ together?

For us, that whole touring cycle was an exciting time, but we were also very anxious to get back out on the road and into the public eye with our fans. Playing these massive rock festivals all over the world, we weren’t really sure how things were going to go. You can plan, plan, plan, but the best-laid plans of mice and men often go awry, and we know that. We absolutely live the motto which our name comes from, and in a lot of ways we weren’t sure what to expect. But after the very first show out there, we had a photographer/videographer/director out with us, and we just started reconnecting with our audience and realising “oh my god you guys, this is powerful”. Having been away for 9 months I think it’s easy to lose sight of that. We wanted to put out ‘unbreakable’ and ‘back to me’ to give a demonstration to audiences who were questioning what we were going to sound like now, now that it’s four of us. For us, it’s like “here you go” – what better way?

Not at all. I think in a lot of ways it forced us to try and not change; we wanted to maintain. What we’ve learned of life is that change is inevitable, and you can’t know how you’re going to deal with it until you’re really in the moment. For us, the most ‘Of Mice and Men’ thing to do for ‘Of Mice and Men’ was to continue on with the four of us – working even harder to be able to face down those challenges or whatever fears or apprehensions we might have had – and in a lot of ways, it felt like the most honest way to do it. We really felt like it brought us closer as a unit, because we only have the four of us to be able to truly understand what it’s like to go through such a life changing event as what has happened to us. It was important for us to show that, because we’ve said it a lot before but we’re not rock stars, we’re not celebrities, we’re musicians who are very, very privileged to be able to live this life. We feel like that because we’ve been honest and created music which is important to us and which resounds with our audience. We will always say that we look out into the audience and see ourselves in the fans every single night, because we were those people who came to concerts, lost our minds, rocked out, went to the VIPs, bought their posters and bought T-shirts. We all still wear those T-shirts; we’re all such big fans of music.

Q9. Do you guys ever annoy each other when you’re on tour for so long?

We’re like a family, living in a tiny tour bus. Well, I guess it’s not too tiny when you’ve got a full band in it – it’s like living in a submarine. If you can imagine having all your brothers and sisters around you in a submarine, it gets really crazy sometimes. We’re all (us and our crew) very close with each other, and in a lot of ways we try and make it feel like a family out here.

You can lose your mind, because there are many dark alleys in the music industry and tour life. For us, we like to stick together and we like to make our road unit feel like a family, because it’s important to have a support system around you in a place which is not necessarily always going to be there to support you. Of course, who wouldn’t have these spits and spats? To us that’s normal, just like in any house hold.

Tonnes of touring. We’ve booked headlining tours; we’re playing everywhere we can. We’ve got so many songs on the album we just can’t wait for everyone to hear, and we’re going to try and play it for as many people as we can.