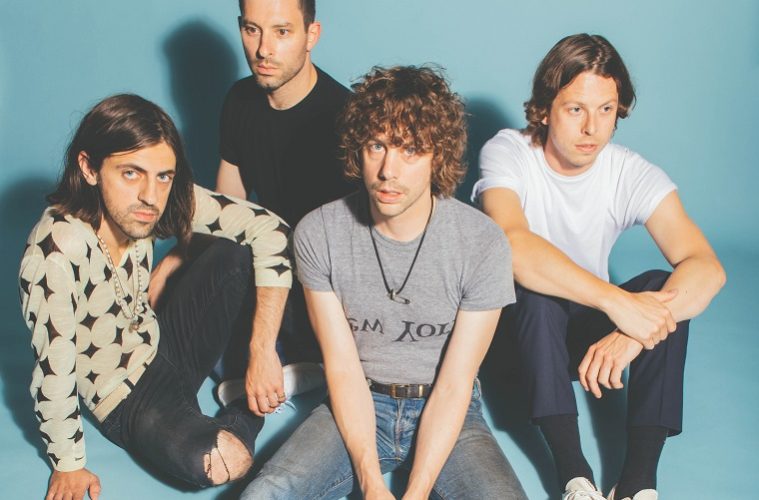 English indie rock band Razorlight are back after a 10 year hiatus with singles from their much anticipated upcoming album ‘Olympus Sleeping’. We caught up with front-man Johnny Borrell to discuss what’s changed over the last 10 years for the band, along with their new music and future aspirations…

Q1. Hi Johnny, thanks so much for taking the time to speak with us? How are you and the band and what are you up to at the minute?

Things are really good, we’re doing a lot of performances and interviews at the minute to promote the 4 singles that have just come out.

Q2. The band’s first album in a decade ‘Olympus Sleeping’ has been announced. How are you feeling about the upcoming release?

I feel great! Anytime I’ve done a Razorlight album it’s always come from a very natural and real place. During the last 10 years I’ve been interested in making other types of music; I’ve been making world music, a solo record, some jazz stuff and some production behind-the-scenes which I’ve all been really enjoying. It’s been a richly rewarding decade of making music for me. I always knew I wanted to make another Razorlight album, I was just waiting for the time to come when it naturally came together.

Q3. Would you compare this album to your previous ones or do you think it’s completely set apart from the others?

When I was a kid I used to go to a lot of gigs, and I think I formed Razorlight because I was just trying to put together the band that I wanted to see when I went to those gigs. I think the albums quite true to that, it’s just fun. If you’re making rock n’ roll and you’re thinking about it too much meaning it’s not natural then it’s going to be no good. It’s really got to come from that instinctive and natural place.

Q4. How would you say Razorlight’s sound and band dynamics have changed during the 10 year hiatus?

I came into Razorlight as a songwriter and a singer before I was a musician, I always played guitar and wrote my share of the riffs, but I think in the last 10 years I’ve really developed as a musician because I’ve been playing all different kinds of music. So in a way, I’m still deep in my understanding of what music can do, whereas I always used to look at the lyrics and the melodies as the important thing.

I think on this record a lot of it’s simple, but there’s a musicality there because I really got into studying the effect of rhythm, percussion and the groove element of drums. I made a record called the ‘Atlantic Culture’ during the hiatus which had a lot of West African influence in it, so this all helped me learn a lot. It was a really fun record to make as well, me and Dave Ellis who’s our guitarist decided we wanted to sit down to not play our normal instruments, so Dave got on the drums and I got on the bass guitar. As soon as we did that all the arrangements came together due to having so much fun playing someone else’s instrument.

We were really lucky because I ran into my favourite rock drummer of all time; a guy called Martin Chambers from the band The Pretenders, and asked him if he wanted to play on the record, which he was really enthusiastic about. He came down that week and we started putting it down, it was quick, fun and probably the most enjoyable record I’ve made.

The other difference being that when I was younger and making music we were less confident. I remember when I’d written ‘Golden Touch’ we were in New York, because we’d just done a gig there, I remember it was snowing and I must of listened to it around 10 times in a row wondering if the thing was any good, whether I should be sat there making music and just hoping so much that it worked. Maybe you get a bit more relaxed about that side of things with time.

Q5. While planning to put this latest album out did you ever have difficulty finding your own sound again whilst under pressure from your fans and labels?

No not at all. I’ve never experienced any label pressure in my career, which is an amazing thing. We just did it our own way from the start, I was never going to do it any other way apart from the way that I wanted to do it. There’s no point in being a musician if you’re not making your music yourself, and for yourself. My label back then, to their credit, were like “This guy is so difficult”, which is what they call it in the music industry if you just want to do your own thing, and they just said “I think we’re just going to let him get on with it”.

Q6. Are there any messages or topics you felt like you needed to cover in the album?

Lyrically Razorlight’s songs are personal; they’re just me singing to people. I started writing songs so I could communicate with people and that’s still why I do it. I’ve never written political songs in Razorlight, apart from that being the purpose of the track ‘America’.

Which is actually an interesting story, I wrote that song when we were on tour and I read in the paper that the Bush administration were happy to practice torture on suspects which I thought was pretty outrageous for a country that was suggesting it was going to war in the name of freedom and democracy. So I write ‘America’ which is all about there being panic and trouble in America, not many people picked up on the link. It was only 4 years later when they had the credit crunch that journalists were saying to me “oh yeah you really predicted trouble in America” and I thought; for me torturing people is worse than a bank loosing loads of money, but there you go.

In Razorlight now it tends to be more personal. I think as an artist it’s really important to talk about what you believe in politically and socially, however that doesn’t usually translate into Razorlight songs.

Q7. I really love your latest single ‘Got To Let The Good Times Back Into Your Life’, what’s the meaning behind the track to you?

Ah thanks! I really enjoyed that one as well. The message just popped into my mind and I originally wrote it really slow, like a 1930’s jazz song and it just stuck with me. It was this simple feeling of needing to allow some pleasure and something that nourishes you in some way because we can spend a lot of time being self critical in this world of comparisons. The song was a deliberation from that feeling, I hope.

Q8. What are your aspirations over the next few years for the band?

To be honest, I just want to tour and go on the road, because I think the connections you make when you’re playing are really important compared to a lot of the ways people connect now, such as the pressure on bands to do the social media side of thing. I do think when you’re playing in front of somebody and your face-to-face with them, there’s a connection that is much more important. I’m really excited, we’ve got a tour in December and I can’t wait to plays these songs to as many people around the world as we can.

*A previous version with errors was published, this is an amended version of the article*