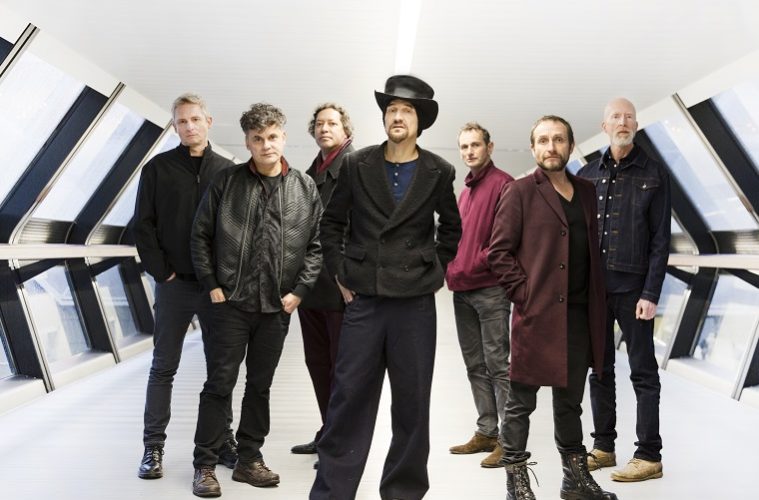 James’ guitarist Saul on the bands most recent album and future

English rock band James formed in Manchester in 1982, the release of their 15th studio album ‘Living In Extraordinary Times’ has once again proven why they are one to keep an eye on for years to come. We caught up with band member Saul to discuss their most recent album and what is in store for the future of the band…

Q1. Hi Saul, thanks so much for taking the time to speak with us? How have things been since the release of your most recent album ‘Living in Extraordinary Times’?

We’ve been doing some festivals, some writing for our next album which in the background but the dust is yet to settle on this record yet. We’ve written some nice stuff which is very much at the embryonic stage, but I think we’ve got the beginning of a really nice body of work that will be the next album. We did some shows back in the summer, had a slight pause and some more shows in Tunisia, Australia and more.

Q2. Would you compare this album to your previous ones or do you think it’s completely set apart from the others?

I think it is comparable, we’ve made 3 records over the last 5-6 years and I think they’re all quite different from each other but I would put them broadly in the category of being less folksy than we have been sometimes in the past, although I don’t mind folksy, folksy is cool. This record is different and it was produced with different people involved so there was slightly different sonic aesthetics, but I would put the 3 records somehow together in a weird way. There are stylistic differences and I think this record is more percussive and a little bit harder edged than the other two, although the other two are probably a little bit harder than the other records that we’ve done before. Also, one of the founding members has changed, Larry, he left and wasn’t really involved in ‘Girl at the End of the World’ so there’s obviously a bit of a difference there as well because this latest record has more me probably as a guitar player rather than Larry to some extent. There are little shifts, it’s not really a guitar heavy record this one, but I think that’s part of this stylistic shift we’ve gone through.

Q3. How would you say the band’s sound and band dynamics have changed since your formation in 1982, do you think your re-formation 10 years ago has been helpful for the band? Have things been better the second time round?

I would say that we’re in a very good place with each other and it’s hard to know how to compare eras, this latest incarnation of us, which is 11 years in the making now, would be a whole career for other bands but this is just the phase two of us really. It’s very hard to know, all I know is that we’re in our 37th year and we’re making, I think, really good music while working very well together. We’re getting close to 40 years which is pretty amazing, we’ve properly started work on what will be on our 16th studio album, we’re really happy. We’re lucky that we have the bloody mindedness that we have to still be making some decent music, I think lot of people get quite scared when their body changes and their hair falls out and suddenly they don’t feel so confident about themselves. When you’re 18 and you join a band you just think that you can rule the world and of course then you get into your 50s and you realise that if you have any place in the world you’re fu*king lucky. I still have hair and I don’t have a fat stomach.

Q4. Are there any messages or topics you felt like you needed to cover in the album?

It doesn’t really work like that, we tend to just write and jam together, there’s 4 of us that do this stuff together, a few of us do music and gamble along until we find that we might have a song, edit and hone in on it and start writing more specifically around the basic idea that we’ve initially created. Then more specific ideas tend to come to the surface, lots of people who write music often say that it’s like a snapshot of a period of time that they’re in and I think a record can be especially like that. We don’t write to order, if somebody said they needed a hit song then we wouldn’t really know what that is, we might write a hit but we wouldn’t really know how we’ve done it. That’s quite an interesting thing because we can’t just demand of ourselves anything other than things that we like, some of which turn out to be commercially viable, and some of which we just love as music. I think the themes and the ideas will develop as we go through the next few months and hone in on our stuff so far.

Q5. What’s been your most memorable memory from the bands many years together?

I feel like we’ve had so much experience together, my personal highlights might be supporting Neil Young in the early 90s. He brought out an amazing record called ‘harvest moon’ which he asked us to go and support with him while he toured America. That was amazing, people were just getting to hear us at that point in America and then it kicked off for us and that was an amazing tour to do. There are lots of low moments as well like illness, people leaving, fights, alcoholic stupidity but that’s all normal band stuff and I don’t think it’s even just related to bands, I bet you could accuse the civil service or a school structure of this. I bet within the hierarchy of Sainsbury’s you’ve got people fighting and alcoholics! It just sounds like a fully functioning family really doesn’t it? Obviously there are different pressures being in a band to being in the management structure of Sainsbury’s, you get to write songs and they get to worry about soya milk.

Q6. What are your aspirations over the next few years for the band?

I would really, really be happy if we could continue to write and be supported in that, because one thing is to write records but we don’t get to release them unless we have support from our label PMG. I think I want that to continue because we have a very good relationship with them and that’s really important for a band like us, lots of bands do stuff ‘on their own’ but I don’t think we are not yet a band that wants to do that or should do that. It’s really goods that we exist within this structure, it sounds very corporate but it’s not, they’re very cool music people. The fact that we’ve done these totally sold out arena shows this month with us 37 years into our career is pretty amazing really. I just hope that creatively we can continue to work in this dynamic way with each other.