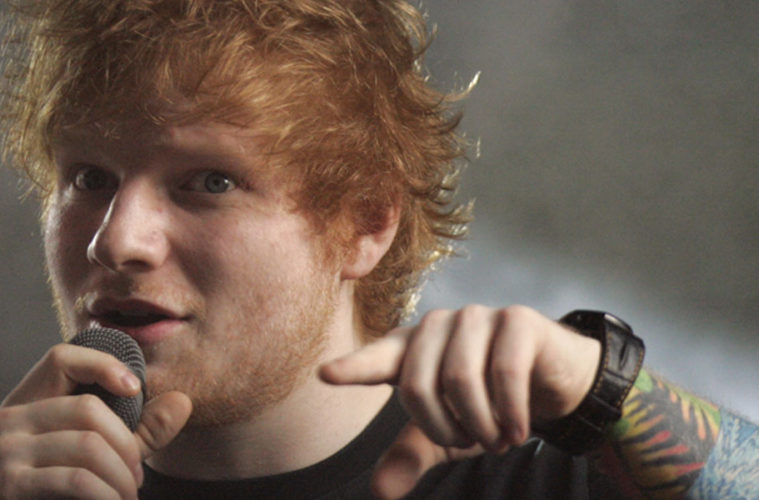 It was one of the highlights of my career. Not only meeting Ed Sheeran and witnessing his raw talent so close and live (in a room with just him, me and two cameramen), but also experiencing the build-up to what was inevitably the coolest thing we’ve ever done; arranging a house party with an exclusive and intimate performance from the man himself in a back garden, with beers and pizza…

It all started when I received a call from one of my music label contacts who was telling me about this huge upcoming talent who had the backing from Radio 1 and was set to become the next big name on the music scene. After checking out his press release and listening to his early music, we were instantly hooked and became fans of his story, sound, and style.

I interviewed Ed Sheeran initially by telephone. It’s worth mentioning that during my career, I’ve interviewed a long list of big names, and honestly, Ed instantly stood out as the nicest most humble of them all. The feature was a huge success and being the inquisitive person that I am, ideas started to flow. I then had another conversation with my contact at the label and together, the discussion of a potential student house party competition came about. After about 45 minutes of exciting chatting, the concept of a competition was finalised and it was now a matter of getting Ed Sheeran and his management on board. Ed’s management loved the idea and coincidentally Ed was also performing at a venue close to our offices a while later, so we grabbed the opportunity to arrange a filmed interview with him, and he also kindly agreed to perform two songs live on video for us. I will never forget the effortless and incredible performances of his two massive hit singles ‘You Need Me, I Don’t Need You‘, and ‘The A  Team‘. His performance was powerful, moving, and intense and we watched in awe as my camera guys and I witnessed a global star in the making. His fans were queuing up outside the venue and although not a household name at this point the hype around Ed Sheeran was starting to build, fast!

By this stage, I had spoken to Ed Sheeran on a couple of occasions (once in person). On both occasions he was simply a cool guy. Happy to help. Happy to perform for us and happy to perform again, for one lucky competition winner and their friends, at their house!

If what I have already explained is not impressive enough, what was to come was almost unimaginable. From the time between Ed Sheeran agreeing to the competition, and the competition actually taking place, he shot to stardom. We were told that no one else could get this opportunity because he was just constantly booked out for 24 months ahead. Fortunately for us and the competition winner, this was a done deal.

Closer to the competition itself, we ran another interview feature of Ed Sheeran in Student Pocket Guide and he was the Freshers cover feature. We ran a massive campaign promoting the competition nationally via our magazine, social media, and by flyering outside Ed Sheeran gigs. We had thousands of entries and selecting the winner was VERY difficult. We shortlisted people down (eventually), to three very worthy, true Ed Sheeran fans. It was a tough decision, but a decision had to be made and Hannah was a huge fan and so we selected her as our winner.

On the day, the team and I headed up in two cars to Hertfordshire. We arrived in good time (with beers for everyone) were welcomed into Hannah and her family’s home, set-up the camera equipment, ordered pizzas, then started to mingle with Hannah and her friends, enjoyed a nice cold beer and relaxed with huge excitement and anticipation for Ed Sheeran to arrive. A couple of cars arrived and then… a knock on the door.

Ed Sheeran, his manager and representatives of Atlantic Records turned up, and it was at this stage I could breathe a sigh of relief. I had made it happen. We had made it happen. And it was real, very real. Let’s not forget we are talking here about someone who at the time had international success and won two Brit Awards (Best British Male Solo and British Breakthrough Act of the Year). His status was only questionable due to his humbleness.

Ed took the time to meet and greet everyone, before making his way into the garden and picking up his guitar. To make the party extra special and exclusive we set a rule whereby a maximum of 20 friends were allowed to attend. And it really did make it even more amazing. The fairly small crowd gathered around on the wall and patio area as Ed stood on the concrete steps leading to the grass, faced the people watching and waiting to hear the first strum of the guitar, and with that, it had begun.

Ed sang for what felt like 5 minutes but was actually 45 minutes, performing a variety of hits including ‘The A Team’, ‘You Need Me, I Don’t Need You’ and ‘Small Bump’.

Hannah’s brother Niall sang along to every word and even performed what could be described as a duo with Ed Sheeran, whilst sat on his garden wall, incredible.

After his amazing performance, Ed stayed a little longer to talk to everyone, signed a load of merchandise and have pictures taken, before leaving a very satisfied group of people quite simply shocked at what had happened.

It’s crazy to think this all happened 8 years ago, and even more surprising to imagine what the man has achieved within this time.

A huge thank you goes out to Ed, his team, management, label, of course Hannah, her guests, family, and everyone who entered into our competition or helped make it what it was. It was simply something money couldn’t buy.