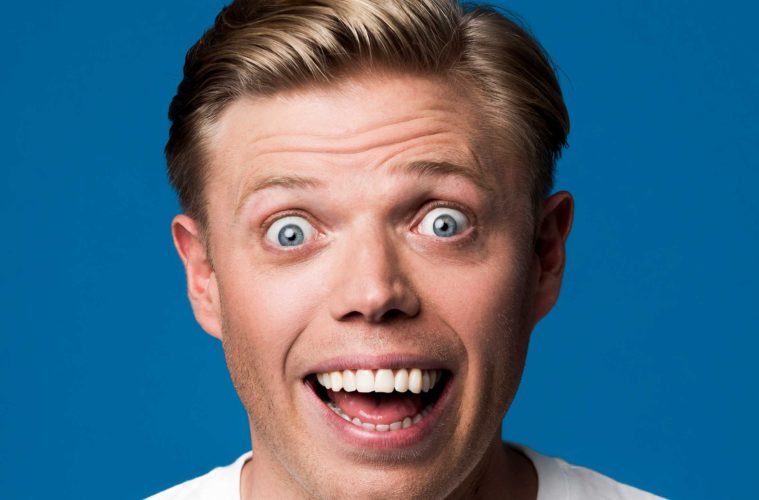 What’s the reaction been like to Rob Beckett’s Savage Socials from your fans so far?
I’ve had such great positive feedback. My Dad loves it, my mum prefers the daytime quiz show that I do. I tried to explain to her she isn’t the demographic for a late night E4 show about social media.

Have you had any responses from the celebrities you’ve rinsed on the show?
Yeah a few. Tom Skinner from The Apprentice loves the attention. He keeps DMing me about it…

After spending so much time around other celebrities, is there anyone who would still make you feel star-struck?
As a Kid I was obsessed with the Alan Davies stand up shows on VHS. He is the only person that made me star-struck. That’s quite embarrassing, isn’t it? Star-struck by Jonathan creek.

What was your personal highlight of your ‘Wallop’ tour?
When the crowd would sing Sweet Caroline before the start of the show. That’s the closest I’ll ever get to being a professional boxer. [laughs]

Could you tell us about your experience hosting The Royal Variety Performance with Romesh Ranganathan? How does something like that come about?
No idea. They asked and I said yes before they could change their minds. Obviously it was annoying that Romesh was there too, but I got through it.

What did you study at university and why?
Tourism, because I wanted to get drunk and do no work.

What advice would you give to any young aspiring comedians reading this?
It’s all about hard work. Gig as much as you possibly can and believe in yourself. Getting your head right mentally is just as important as the jokes. But gigging is the key. Builds confidence and material.

Have you kept any of the ‘prizes’ you won back during your time on Taskmaster?
Only kept the trophy. It makes a great door stop.

What’s been your most embarrassing moment?
I sh*t my pants at a kid’s birthday party when I was four.