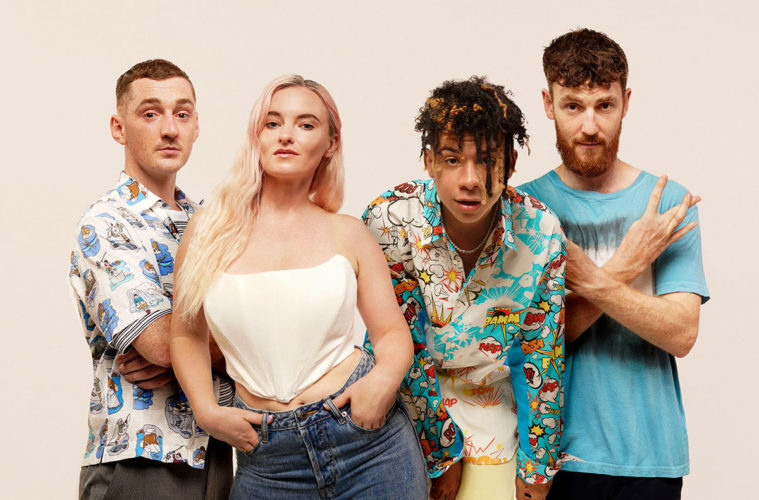 Clean Bandit score 10th UK top 10 with ‘Tick Tock’ and join Little Mix as the only British group to have a new release single in the top 10 of the Official Singles Chart in 2020.

Written by the band, iann dior and Bastille’s Dan Smith, with production courtesy of Grace and Jack of Clean Bandit alongside Mark Ralph (Years & Years, Sigala), ‘Higher’ is unmistakably Bandit – a genre-bending, indelible track, showcasing one of the world’s hottest new talents.

The song’s heartening message is also brought to life in the official video, which was directed by the visionary band on location in Jamaica, and follows the narrative of a castaway, played by iann dior, who survives a boating accident and grows up fending for himself on a deserted island with the loving memories of his father spurring him on until he is rescued at sea by a party boat carrying some very special guests…

Clean Bandit kicked off an exciting new chapter in their illustrious career last August, joining forces with BRIT Award-winning breakthrough star Mabel on smash hit ‘Tick Tock’ (feat. 24kGoldn). With their GRAMMY-winning pop formula still proving a hit, the track scored the band their 10th UK Top 10 and saw them join Little Mix as the only British group to have a new release single in the Top 10 of the Official Singles Chart in 2020. To date, the song has garnered over quarter of a billion global streams and over 54 million views of the official video.

Concluding the year, Grace lent her talents to the star-studded line-up of artists – Cher, Nile Rogers, Kylie Minogue, Robbie Williams and more – for BBC’s Children In Need charity single ‘Stop Crying Your Heart Out’, raising vital funds to help support children and young people across the UK facing disadvantage, at a time when they need it most. And just in time for New Year’s Eve, the band released their third mash-up of the year, 24 hours x Gypsy Women (feat. Yasmin Greene & Crystal Waters). Listen here.

Clean Bandit have remained one of pop’s most essential and dynamic forces ever since the release of their 2014, GRAMMY-winning breakout single ‘Rather Be’ feat. Jess Glynne. With classical and electronic elements at the heart of their music – Grace, a classically-trained cellist, Jack, a producer and multi-instrumentalist, and Luke, a drummer/remixer, – their unique methods of both production and collaboration have seen Bandit pioneer their very own pop blueprint.

Meeting at university where the band curated and DJ’d at their very own club night (a night that saw Joy Orbison and James Blake make early appearances), Clean Bandit have continued to tap into their multi-genre approach; one that has seen them collaborate with a raft of superstar names over the course of their two albums: ‘New Eyes’ (2014) and ‘What Is Love?’ (2018). From Lizzo to Demi Lovato to Anne-Marie to Charli XCX, their network knows no bounds and is a testament to a group who possesses an innate ability to fuse electronic, pop, r&b, dancehall and everything in-between – something that has seen them become one of the globe’s highest-streaming acts and equally, one of the most successful British bands of recent years.

A 6 x BRIT-nominated trio whose metrics reside in the multibillions [they have exceeded more than 40 million singles, 5.4 million albums, 14.5 billion streams and 6.2 billion YouTube views], Clean Bandit have scored ten ‘Top 10’ singles in their home market, with four of those songs also reaching No.1 status: ‘Solo’ feat. Demi Lovato; ‘Symphony’ feat. Julia Michaels; ‘Rather Be’ feat. Jess Glynne; and the 2016 UK Christmas No.1 ‘Rockabye’ feat. Anne-Marie and Sean Paul (the latter has now surpassed 1 BILLION streams on Spotify). Additionally, the band’s deeply conceptual, self-directed official music videos have further enhanced the trio’s reputation as a powerful and thoughtful creative force.

Alongside their collective achievements, each member of Clean Bandit can firmly stand behind their own solo merits, too. Jack Patterson – who co-wrote the global smash ‘Señorita’ for Shawn Mendes and Camila Cabello – is a 2 x Ivor Novello winner having received ‘Best Contemporary Song’ and ‘Most Performed Work’ awards in 2016 for his work on ‘Rather Be’. Grace Chatto, who was recently named as one of the ‘100 most influential female songwriters and composers in the UK’ by PRS for Music, has become a staunch voice in support of the Labour party over recent campaigns, while Luke Patterson’s flare for remixing has seen him commissioned to remodel tunes from The Killers to Robin Schulz.

Born in Puerto Rico and raised in Corpus Christi, Texas, iann dior found instant success with the first song he ever wrote. Earning 10,000 plays in its first week, the song caught the ear of Internet Money’s Taz Taylor, who invited him out to L.A. to work with the producer and artist collective. Shortly thereafter, iann quickly went from high school grad to label signee, inking a deal with Elliot Grainge’s 10K Projects in early 2019. Having established himself as a lo-fi hip hop artist, garnering millions of streams with tracks such as ‘cutthroat’ and ‘emotions’, iann went on to release hit, ‘gone girl’, which provided a perfect lead up to his debut album ‘Industry Plant’. The album featured collaborations with rock stars like Travis Barker and showed off his ability to shapeshift from emcee to emo rock writer with ease. By mid-2020, just as he dropped his EP ‘I’m Gone’, iann was featured on 24KGoldn’s semi-pop, semi-rap song ‘Mood’. The infectious single immediately began to climb the charts worldwide, becoming the duo’s first No.1 on Billboard’s Hot 100 Chart and the UK’s Official Charts.