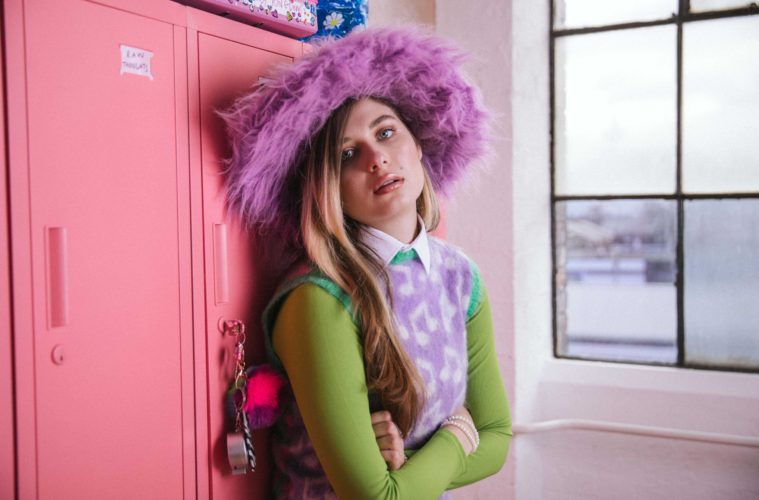 “I am now Baby Queen!”: Bella Latham on Baby Queen and ‘Dover Beach’

Having landed on the London scene at the age of 18, Baby Queen (otherwise known as Bella Latham) is now only 23 and is fast becoming one to watch. As she works to integrate her honest and (often) scathing perspective into the pop scene, Baby Queen is intent on proving her intelligence as a lyricist and a musician. Her latest single ‘Dover Beach’, which was released on April 14th with Polydor Records, has already been premiered as Radio One’s Hottest Record. Following its release, we caught up with Baby Queen to discuss this new love song, which, though might be a first for the Queen of the Babies, is certainly on brand with her satirical style.

”I am now Baby Queen!”: Bella Latham on Baby Queen and ‘Dover Beach’ by Jessica Doran

If you hadn’t already measured this from her astute lyrics, upon meeting Baby Queen/Bella, you are immediately confronted with her quick-witted sense of humour, confident sense of herself as an artist, and laid-back persona, all of which adds to her captivating appeal.

Assured that I would be given an intriguing answer, I instantly wondered where the quirky name Baby Queen had originated from…

‘‘I started making the music first and I had an album’s worth of music and my name didn’t sound like the music. I wanted everything to come from the music. The music sounded like lilac purple to me…so the name had to sound like lilac purple…and then (I always sound like a freak when I’m describing this) but then I’d written Baby Queen in a sentence in a notebook and then I was like that is lilac purple and that sounds like the music. It was so weird at first my family was like ‘‘that is so weird that is the worst name ever,” and I was like ‘‘no, I promise you it’s really good!’’. Then it was so weird when I had to change my name to Queen of the Babies just out of nowhere in front of my friends from school. Hahaha I was like I am now Baby Queen!’’

And there you have it, Baby Queen was born and Bella Latham’s identity somewhat split between the two – or was it?

‘‘I think Baby Queen is an amplification of all of it, the manic-ness and you know depression and all of the things inside of me, of which I wouldn’t have had the courage to do without Baby Queen. It’s a way to completely amplify and satirise parts of myself.’’

Baby Queen’s shameless honesty is definitely what makes her lyrics and persona so relatable, and her new single is no exception. However, despite only having been released last week, interestingly, Bella informs me that ‘Dover Beach’ was pre-written a long time ago.

‘‘A lot of my music came before I had a connection with the people that listened to it, so I actually wrote it first and then they could go on the journey whenever the song was released so yeah it feels different and it’s really cool.’’

I admitted that ‘Dover Beach’ had been in my head for days now, and it seemed that I was not the only one who had succumbed to this catchy yet low key biting tune.

‘‘Hahaha! My management keep texting me to being like ”people will not stop singing your song all day.” ’’

With ‘Dover Beach’ on the brain, I wanted to get stuck in. If you have listened to any of Baby Queen’s music before, her dedication to using an uplifting ‘pop’ melody is intentionally deceiving. Baby Queen’s music is full of twisted satire and she thrives off embodying her music with blunt lyrics that emphasise her frank and honest inner self.

The latest single ‘Dover Beach’ is no exception to the ‘Baby Queen’ rule, and, though it is, in essence, a love song, the single toys with darker lyrics intended to reflect feelings of frustration at the way ‘love’ can make you feel. My personal favourite has to be the deadpan lyric: ‘your mirage is like a stalker I should push him off the cliffside’.

It would seem that juxtaposing sinister lyrics with a lighter pop melody has become a trope of the Baby Queen brand, and so I wanted to ask Bella if it had become an active aim of hers to somewhat defy people’s expectations with her musical style…

‘‘I think maybe, I think maybe there is some of that in it. I think for me I just don’t like sounds that are dark. My producer has to sometimes be like ‘‘please can we use this chord?’’ and I’m like ‘‘no, I hate it it’s horrible.” I think it’s just ended up being a mirror of me as a person because I’m such like life of the party/ people pleaser but then me as a person is really depressed and like I hate myself. I think it’s a total reflection of that. I like the satire of that as well, there’s something satirical about making something intrinsically dark sound really funny.’’

Baby Queen has only just recently finished supporting Yungblud on a virtual tour, but when suggesting that Bella should be proud of how well her career was going, she admitted that her busy lifestyle means that ‘‘there’s not a lot of time for pride.’’

Having said this, her fast moving career should only be seen as a compliment to her definitive musical talent, as she has only been promoting her music in London for the past five years. Bella lived in South Africa prior to moving to London at 18, and so I was interested to know how she introduced ‘Baby Queen’ to the UK scene, and how it had been for her to create a career as a musician in a brand-new city…

‘‘Oh my god, it’s the hardest thing in the world. I don’t know how people have done it before and I don’t know how I did it. I came here with demo CD’s and was trying to knock on Universal and be like ‘‘please listen to it,’’ and then that didn’t work, and I went into a depression and then I wrote some other songs which are just not as good as this. I was broke and living on people’s couches and then I started this thing and life just got better. But it took f***ing forever.’’

At this point I became so absorbed in Bella’s honest response that I forgot my role as the interviewer. As a cool and collected Bella casually smoked her cigarette, I could not help but draw upon the impressive display of guitars attached to the wall behind her.

‘‘Ahhhhhhh,’’ she said this with a smirk on her face as she leaned back to proudly show me her real passion: the trophies that define her raw musical talent.

‘‘Oh I play loads I’m so intense about the stage show. I have to play a certain amount of guitar. I’ve got a little custom fender Baby Queen guitar on the way.’’

One thing is for sure, I think we are all going to be jealous of Bella’s custom-made fender. Interestingly though, upon discussing her dedication to guitar playing and rocking out on stage, it seemed that Bella felt ever so slightly restricted by being associated with the pop genre. 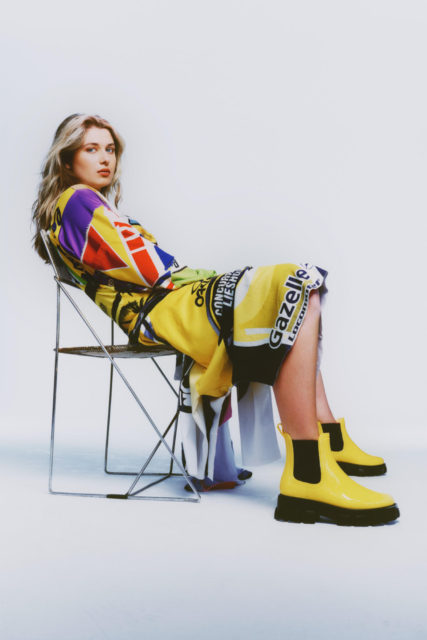 ‘‘When I first went into the studio to make these songs I said so starkly that I am not a pop artist and I will not make pop records. But I just am pop; I am just breathing pop like I can’t help it. I think there’s so much pop music that has gotten so boring and I think there is so much more to me than a love song. Although I am writing them now because there is so much emotion and whatever now, but I was in this time where I wasn’t really feeling any emotions and whatever and for a time, I was really observational.’’

Having picked up on this tentativeness with the pop genre, I wanted to acknowledge the fact that Baby Queen had once referred to her EP ‘Medicine’ as “the introduction to the essay, where I said all my points and beliefs,” and that upon writing her new single ‘Dover Beach’, she said she felt more of a ‘‘freedom to write love songs without someone thinking I’m vapid and shallow!”

I asked Baby Queen if this was a deliberate tactic of hers; I wondered if she felt hesitant to initially write about love songs out of fear of being stereotyped and therefore taken less seriously.

I found it so interesting that Baby Queen should say this because I had read that one of her inspirations was Taylor Swift: an artist who has made her career out of writing love songs.

‘‘Yeah exactly. Which is such a weird thing because I think she is so incredible and I would never think of her in that way. I think for me I then discovered Matty Healy and I discovered the way that he writes lyrics. It just opened up this whole other part of me and the way that I write and it wouldn’t work if I just sang love songs – people wouldn’t buy it. I think there is a point in time where you realise you have to be so completely true and honest to who you are because that’s the only thing that makes your music different to from everyone else is the uniqueness in it. So, for me it was like OK that is Taylor Swift but ”what is me?” ’’

This felt like a very mature answer to my probing question and a clear indication to Baby Queen’s personal direction in the pop genre.

There is no doubt that Baby Queen is a multifaceted artist: her last album was praised for its socio-critical stance, and then ‘Dover Beach’ explores a completely alternative avenue as a love song. Furthermore, I was excited to hear about what other topics Baby Queen might challenge herself to explore.

‘‘There’s a lot of mental health stuff because that never goes away. There’s also a lot of love songs. Hahaha I’m such a hypocrite.’’

It seems that Baby Queen is not afraid to say what a lot of people may be going through, and this is bound to add to her fanbase as an approachable character that people can identify with. I can imagine that, soon, Baby Queen will have the pick of the bunch of who she might want to collaborate with, so I had to ask who she had her eye on to work with in the music industry…

Without any hesitation at all, Bella replied: ‘‘Lorde.’’

Well, until this royal collab happens, you can expect to see Baby Queen live if COVID restrictions ease.

‘‘I’ve actually got loads of festivals set up through the summer I just don’t know if they will happen. Then I’ve got a tour with a band called Sea Girls in October and then I’ve got Baby Queen headline shows in London.’’

It seemed like a shame to leave Bella/Baby Queen after what felt like such a brief and refreshing conversation, but I am excited to see her continue to thrive in the music scene as a lyricist dedicated to using her lyrics to express her authentic and honest self.

You can listen to more of Baby Queen’s music here.

”I am now Baby Queen!”: Bella Latham on Baby Queen and ‘Dover Beach’ by Jessica Doran