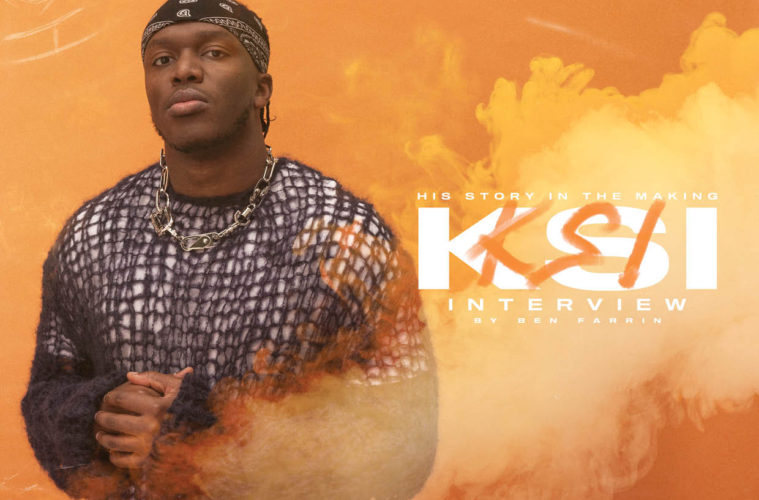 KSI has amassed 23m+ YouTube subscribers, won a professional boxing fight billed as the “biggest internet event in history”, and is now making huge moves in music. We caught up with the main man himself to talk all things YouTube, music, boxing and what it takes to build a global personal brand…

What was your life like growing up as a child?

I had very strict African parents who put me in line if I ever misbehaved, I’d go to church every Sunday, they would drop me off and pick me up from school every day without fail. I was never allowed to have sleepovers, never allowed to go to parties, I was quite restricted as a kid which is why I probably had to find new ways to experience entertainment and found joy through the internet and gaming. It was definitely a strict upbringing, but it’s made me the person I am today which I’m grateful for.

Can you remember the first time you picked up a camcorder and at the time, what was your plan?

This is a good question! I don’t think anyone has ever asked me this before. The first time believe it or not was when I was like six or seven years old. Back in the day, me and my brother used to record toys wrestling each other. It’s cringe to think about that now but we would have fights and wrestling matches between toys. I’d have an action man and he would have a teddy and we would have a fight. We’d create a storyline – I have no idea where those tapes are, but we used to record each other back in the day filming these random toy videos. That’s taken me back that!

As for a plan, I didn’t have one. I didn’t think this was going to go anywhere. I just wanted to record it because it was fun. It was sick! Me and my bro would watch WWE a lot and as well as do wrestling moves on each other, we’d record ourselves doing wrestling moves with these toys. 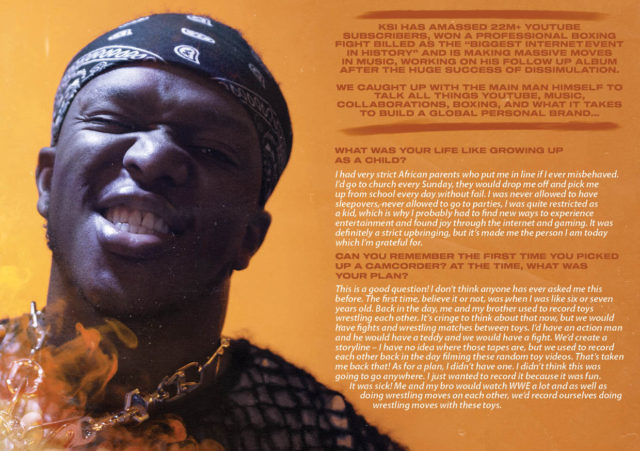 You’ve amassed a staggering 23M+ YouTube subscribers – can we be cheeky and ask what kind of money your channel makes to give our student readers some encouragement to keep publishing content?

Very cheeky! I don’t have to tell you how much I make. Let’s say I make a good amount. Out of all the industries I am involved in (boxing, music, YouTube), I make the most from YouTube.

Can you describe how you felt after your boxing match with Logan Paul, when you heard the words “THE WINNER BY SPLIT DECISION, FROM THE UNITED KINGDOM… K…S…I”

Come on man, it was insane. What a moment, incredible moment, unbelievable. I put my heart and soul into this, blood, sweat and tears went into this fight and to come out victorious is so amazing! To prove everyone wrong and I have the self-belief to show everyone I can beat Logan Paul. As the underdog, a lot of people wrote me off and I was victorious. I got to celebrate in front of Justin Bieber. Justin Bieber was praying for Logan Paul to win and God didn’t answer his prayers! To beat Logan Paul in his home country is crazy. Unbelievable scenes, gassed, one of the best moments of my life.

They called it the biggest event in internet history! Is there anything that KSI is not good at?

Ice skating, I’m terrible at ice skating. I remember I went on a date with a girl where we went ice skating and I tried to fletch to show her that I could ice skate but obviously I couldn’t. So, I tried just doing a move and I messed up, fell on the floor and kids started laughing at me so that was embarrassing. I can’t ice skate to save my life. Anything to do with ice, snow, water – swimming. I can barely swim!

Let’s talk about your music. Firstly, congratulations! The latest single (Houdini) from your new album ‘Dissimulation’ surged straight to #6, and was the highest new entry in the Official UK Singles Chart! How did you celebrate?

I celebrate more my fans. I didn’t really celebrate; I was gassed obviously. It was insane, I couldn’t believe it. For me, the main thing is the album and that’s my main goal and that’s what I’m excited for everyone to hear because I put every ounce of my being into this album and I thought Houdini was a good song, not one of my best so for it to hit #6, I was surprised at how well it did. When people hear my album, that’s what’s going to gas me up! I want people to be like ‘yo KSI is on a different level, JJ is doing bits, never knew he could do music like this…’ that’s exactly what I want. I’m also indoors so I can’t go anywhere to celebrate. The album launch party was going to be huge! But we move…

Absolutely loving your sound by the way! So fresh! What’s your personal favourite track from the album?

Let me do top three. My top three are ‘Domain’, ‘Cap’ and ‘Down Like That’. Obviously, everyone has heard ‘Down Like That’. ‘Domain’ is a different energy man, I don’t think there is any other track like it. No one sounds like how I do on ‘Domain’, it’s just different, it’s a hybrid. It’s a bit of grime, bit of rock, bit of rap – it’s different energy and I love it. I just know it’s going to go off at the live shows. Absolutely annihilate shows. Again, I think ‘Cap’ is going to kill it at shows, I just know the audience is going to go nuts. It’s a mad track and I can’t wait for people to hear it. ‘Undefeated’ is just a ‘yo I’ve done all of this undefeated’ – it’s a track to gas me up, an ego track you could say. I know people are going to love that track as well. I bet Floyd Mayweather is going to play the hell out of that track! 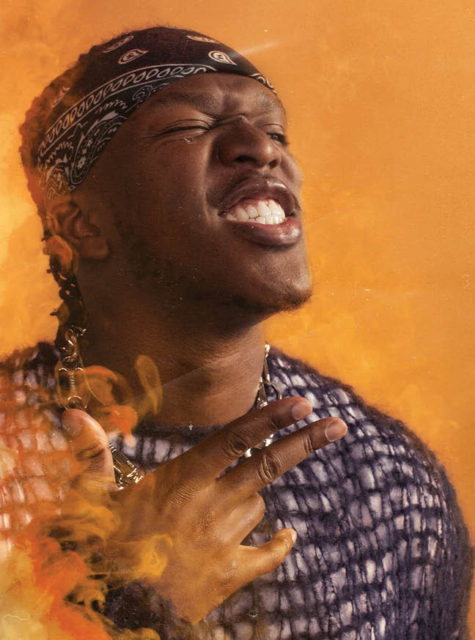 What’s the biggest tip you would give to someone starting or developing their personal brand?

What’s the biggest lesson you’ve learned during your career?

Self-belief. Always believe in yourself. Not everyone is going to understand what you do, not everyone will like what you do but as long as you’re having fun and it’s right for you, that’s all that matters.

Education is very important. Don’t be afraid to ask questions. That’s why the teacher is there to help you out. If you don’t know what you want to do when you graduate, don’t worry about it. I didn’t know what I wanted to do when I was growing up and I found myself – found what I enjoyed doing and then realised that was what I wanted to do when I grow up. It’s one of those things, the time will come when you will know what you want to do in life so don’t rush. Don’t panic. Live life! If you fail, it’s not the end of the world. You are the only one that can fail yourself, no one else can fail you for you.

Can you tell us a funny story about yourself, something most people won’t know about KSI?

I’ve been catfished before. I swiped right on a girl on Tinder and she wasn’t who she said she was when I met her.

Where do you see yourself in three years’ time…?

I have no idea. People always ask me this. I don’t know. If someone said 10 years ago, ‘where do you see yourself?’, I wouldn’t have put myself in this position. I wouldn’t have said ‘I’m going to making a song with Rick Ross, Lil Baby, Offset, Jeremih, have three boxing fights, beat Joe Weller, fight at the Staples Center, a sold-out Manchester Arena’ I would never have anticipated those things. I never would have thought this would happen so I can’t tell you where I’m going to be in three years. Let’s see what happens. That’s the thing with me, you never know what to expect. I guess that’s why people and all my fans are so intrigued.